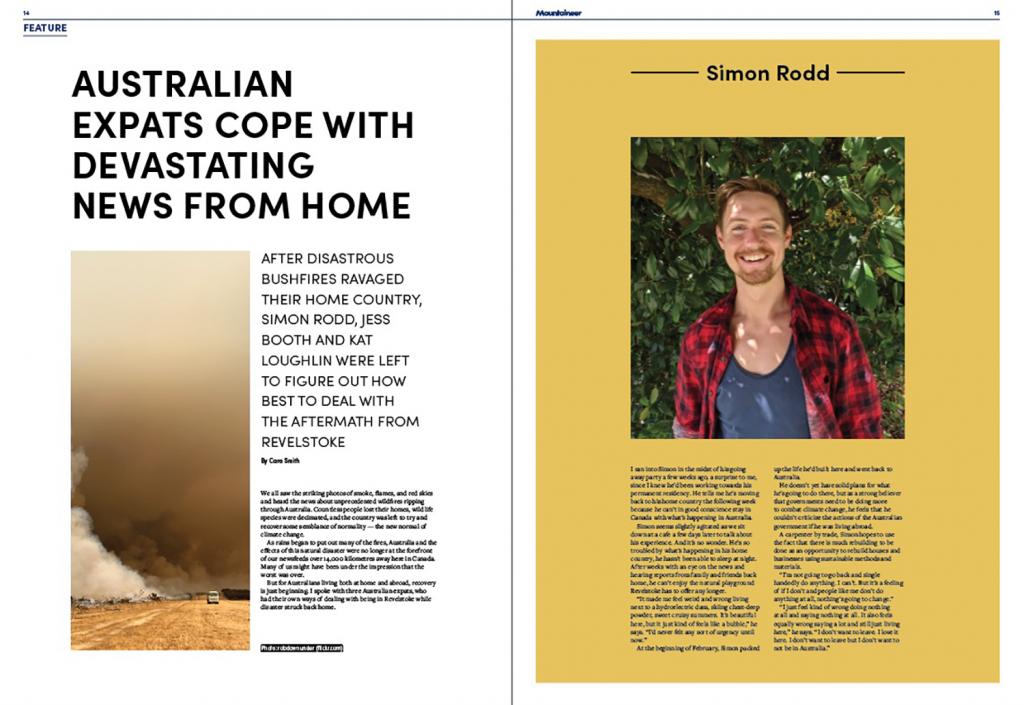 This article first appeared in print in the March 2020 issue of Revelstoke Mountaineer Magazine.

We all saw the striking photos of smoke, flames, and red skies and heard the news about unprecedented wildfires ripping through Australia. Countless people lost their homes, wildlife species were decimated, and the country was left to try and recover some semblance of normality — the new normal of climate change.

As rains began to put out many of the fires, Australia and the effects of this natural disaster were no longer at the forefront of our newsfeeds over 14,000 kilometres away here in Canada. Many of us might have been under the impression that the worst was over.

But for Australians living both at home and abroad, recovery is just beginning. I spoke with three Australian expats, who had their own ways of dealing with being in Revelstoke while disaster struck back home.

I ran into Simon in the midst of his going away party a few weeks ago, a surprise to me, since I knew he’d been working towards his permanent residency. He tells me he’s moving back to his home country the following week because he can’t in good conscience stay in Canada with what’s happening in Australia.

Simon seems slightly agitated as we sit down at a cafe a few days later to talk about his experience. And it’s no wonder. He’s so troubled by what’s happening in his home country, he hasn’t been able to sleep at night. After weeks with an eye on the news and reports from family and friends back home, he can’t enjoy the natural playground Revelstoke has to offer any longer.

“It made me feel weird and wrong living next to a hydroelectric dam, skiing chest-deep powder, sweet cruisy summers. It’s beautiful here, but it just kind of feels like a bubble,” he says. “I’d never felt any sort of urgency until now.”

At the beginning of February, Simon packed up the life he’d built here and went back to Australia.

He doesn’t yet have solid plans for what he’s going to do there, but as a strong believer that governments need to be doing more to combat climate change, he feels that he couldn’t criticize the actions of the Australian government if he was living abroad.

A carpenter by trade, Simon hopes to use the fact that there is much rebuilding to be done as an opportunity to rebuild houses and businesses using sustainable methods and materials.

“I’m not going to go back and single-handedly do anything. I can’t. But it’s a feeling of if I don’t and people like me don’t do anything at all, nothing’s going to change.”

As I’m wrapping up my chat with Simon, he calls out to a woman walking through the cafe and introduces her to me as Jess Booth, another young Australian. Like Simon, Jess feels strongly that not enough is being done by the Australian government to address climate change. She speaks passionately about the fact that the fires wouldn’t be as severe as they have been if we weren’t in the midst of a climate crisis.

The disaster hits even closer to home for Jess. Her family has spent weeks in fear of the fires destroying their farm near Jervis Bay. The situation was at its worst for them on New Year’s Eve and Jess remembers the panic she felt as news came in that the fires were getting dangerously close to the property where she’d grown up.

During the first round of fires near their property, Jess’s mother and stepfather rushed around their lawn, stamping out small fires started by bits of burning bark flying from nearby trees. Luckily, a fire crew came in before the fire reached their home. The close call left Jess feeling helpless this far from home.

A week later, a second wave of fires was meant to go through the same area. Jess’s family was even more serious about preparations the second time around, sending their horses, chickens, dogs and cat to a safe place to wait it out.

“That was a really hard week or so,” Jess says. “I just felt like I was living in two different worlds. The home that I knew was completely on fire and so many of the places I love on our property, just knowing that they would be totally burned … The fire was so hot that I know they won’t be able to recover.”

Jess felt a stark contrast between what was happening back home and the life she was living in Revelstoke. As she was shovelling out from under meters of snow, her family was fighting to keep themselves and their homes safe from record-breaking wildfires.

“It felt like I wasn’t living in either place. It was this weird limbo land for a while,” she says. “I felt terrible for my family that I wasn’t there. I probably would have been a nervous wreck and terribly distraught and not that helpful, but at least I could have been moving animals or there for moral support. I feel pretty guilty about not being there.”

Jess believes the landscape of her home will be so changed that she’s hesitant to go back. She wants to remember the rain forests and creeks she played in as a child the way they were before the fires so she’s now reevaluating what her future will look like.

With a background in environmental science, she’s aware that the scale of the Australian wildfires is likely a result of climate change. Like many young people, she’s frustrated that the climate crisis has been allowed to get to this level of severity.

“It’s hard to feel positive sometimes,” she says. “I feel like you can [make] small changes in your life, which add up for sure. But it’s at a point now where I feel like unless it’s a public policy change across the planet, how can we make that much of a dent?”

It comes as no surprise that Australian expats are so well-connected in Revelstoke and I quickly find that out when Jess mentions someone she wants to connect me with: a veterinarian specializing in bird and wildlife care who has been rehabilitating animals injured and affected by the fires.

I reach Kat as she’s about to return to Canada after spending two weeks back in Australia. Kat was visiting her partner in Revelstoke for the winter when the fires and their effects on the local wildlife worsened.

Feeling a sense of responsibility because of her background and profession, Kat joined forces with Todd Driggers, a veterinarian from Phoenix, Arizona, to fundraise for the relief efforts. Kat raised over $600 by setting up donation jars in Revelstoke cafes and combined that with the funds raised by her American counterpart to help out the Adelaide Koala Rescue and their work to rehabilitate 150 koalas back into the wild.

At first, Kat was hesitant to return to Australia, concerned about whether the trip would be worth the carbon footprint.

“Flying back was not an easy decision,” she says. “It’s my belief that a lot of what we’re facing is due to the current climate crisis and I’m aware that travel is one of the massive contributors to that.”

“But my colleague persuaded me in the end that my contribution here was going to be worth the detriment that I would be having with my carbon [footprint] to come back to Australia.”

Kat and the rest of her group formed a team of volunteers working with AVERT, the emergency animal rescue program at Vets Beyond Borders in Australia. Through this work, she’s been most struck by the sheer scale of destruction caused by the wildfires and by knowing that while there were animals that could be saved, there were also so many more that could not.

The image of all the animals they couldn’t reach haunted her as she worked with drone pilots to find injured animals among the skeletal remnants of burned trees and fires still smouldering in the undergrowth.

Kat is returning to Canada affected by what she’s seen but remains encouraged by those she worked side by side with.

“I’ve been overwhelmed by the strength I’ve seen in the people in these communities and the ability of nature to restore itself,” she says “It’s true that this country does need fire to regenerate and the issue is not the fires. The issue is the scale of the fires.”

“You’re meant to have fires that are survivable, not Armageddon.”

While recent rains have helped calm much of the fires, the bushfire season could run as late as April in New South Wales. And with climate change increasing temperatures worldwide, the Australian bushfires could very well just be a taste of what’s to come.

In the meantime, Australians far from home will continue to face the decision of whether to stay abroad or return to find a homeland that’s been permanently changed.