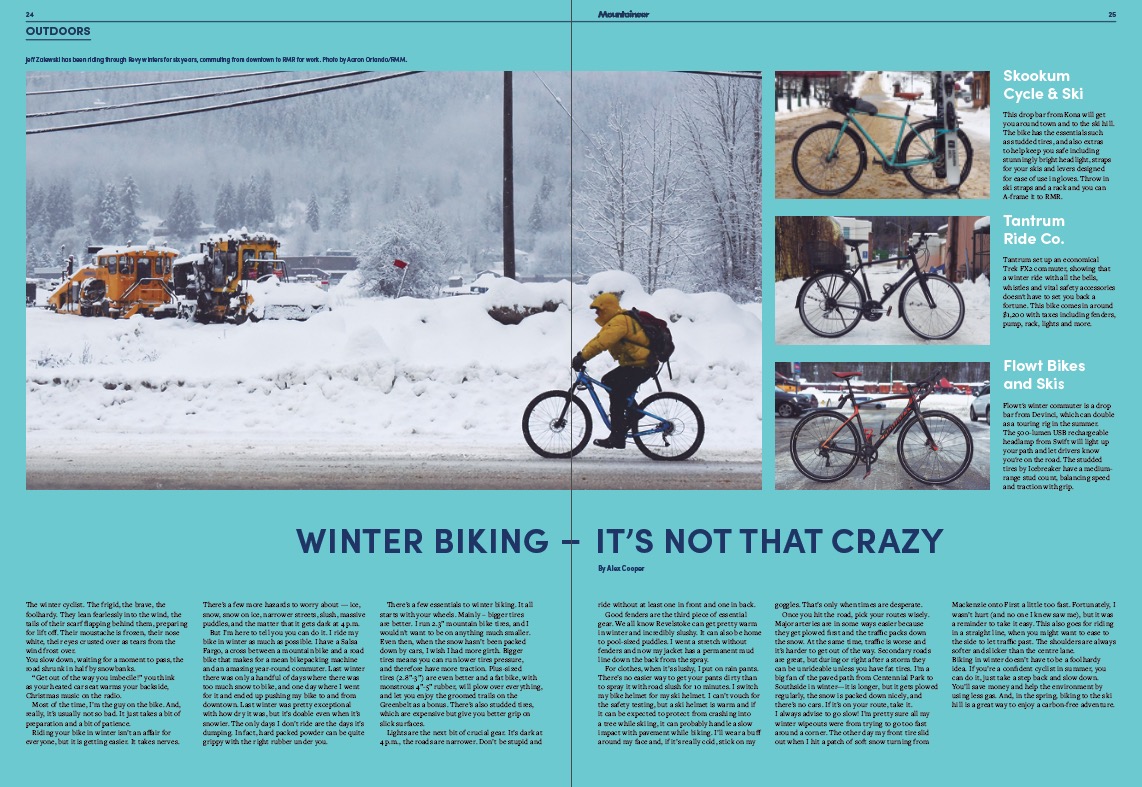 This article first appeared in print in the January 2020 issue of Revelstoke Mountaineer Magazine.

The winter cyclist. The frigid, the brave, the foolhardy. They lean fearlessly into the wind, the tails of their scarf flapping behind them, preparing for lift off. Their moustache is frozen, their nose white, their eyes crusted over as tears from the wind frost over.
You slow down, waiting for a moment to pass, the road shrunk in half by snowbanks.
“Get out of the way you imbecile!” you think as your heated car seat warms your backside, Christmas music on the radio.

Most of the time, I’m the guy on the bike. And, really, it’s usually not so bad. It just takes a bit of preparation and a bit of patience.

Riding your bike in winter isn’t an affair for everyone, but it is getting easier. It takes nerves. There’s a few more hazards to worry about — ice, snow, snow on ice, narrower streets, slush, massive puddles, and the matter that it gets dark at 4 p.m.

But I’m here to tell you you can do it. I ride my bike in winter as much as possible. I have a Salsa Fargo, a cross between a mountain bike and a road bike that makes for a mean bikepacking machine and an amazing year-round commuter. Last winter there was only a handful of days where there was too much snow to bike, and one day where I went for it and ended up pushing my bike to and from downtown. Last winter was pretty exceptional with how dry it was, but it’s doable even when it’s snowier. The only days I don’t ride are the days it’s dumping. In fact, hard packed powder can be quite grippy with the right rubber under you.

There’s a few essentials to winter biking. It all starts with your wheels. Mainly – bigger tires are better. I run 2.3” mountain bike tires, and I wouldn’t want to be on anything much smaller. Even then, when the snow hasn’t been packed down by cars, I wish I had more girth. Bigger tires means you can run lower tires pressure, and therefore have more traction. Plus-sized tires (2.8”-3”) are even better and a fat bike, with monstrous 4”-5” rubber, will plow over everything, and let you enjoy the groomed trails on the Greenbelt as a bonus. There’s also studded tires, which are expensive but give you better grip on slick surfaces.

Lights are the next bit of crucial gear. It’s dark at 4 p.m., the roads are narrower. Don’t be stupid and ride without at least one in front and one in back.

Good fenders are the third piece of essential gear. We all know Revelstoke can get pretty warm in winter and incredibly slushy. It can also be home to pool-sized puddles. I went a stretch without fenders and now my jacket has a permanent mud line down the back from the spray.

For clothes, when it’s slushy, I put on rain pants. There’s no easier way to get your pants dirty than to spray it with road slush for 10 minutes. I switch my bike helmet for my ski helmet. I can’t vouch for the safety testing, but a ski helmet is warm and if it can be expected to protect from crashing into a tree while skiing, it can probably handle a slow impact with pavement while biking. I’ll wear a buff around my face and, if it’s really cold, stick on my goggles. That’s only when times are desperate.

Once you hit the road, pick your routes wisely. Major arteries are in some ways easier because they get plowed first and the traffic packs down the snow. At the same time, traffic is worse and it’s harder to get out of the way. Secondary roads are great, but during or right after a storm they can be unrideable unless you have fat tires. I’m a big fan of the paved path from Centennial Park to Southside in winter—it is longer, but it gets plowed regularly, the snow is packed down nicely, and there’s no cars. If it’s on your route, take it.

I always advise to go slow! I’m pretty sure all my winter wipeouts were from trying to go too fast around a corner. The other day my front tire slid out when I hit a patch of soft snow turning from Mackenzie onto First a little too fast. Fortunately, I wasn’t hurt (and no one I knew saw me), but it was a reminder to take it easy. This also goes for riding in a straight line, when you might want to ease to the side to let traffic past. The shoulders are always softer and slicker than the centre lane.

Biking in winter doesn’t have to be a foolhardy idea. If you’re a confident cyclist in summer, you can do it, just take a step back and slow down. You’ll save money and help the environment by using less gas. And, in the spring, biking to the ski hill is a great way to enjoy a carbon-free adventure.

For this feature, we asked Revelstoke bike shops to put together a winter commuter, including a range of bikes, from economical to higher end. Here are some of their suggested winter setups. 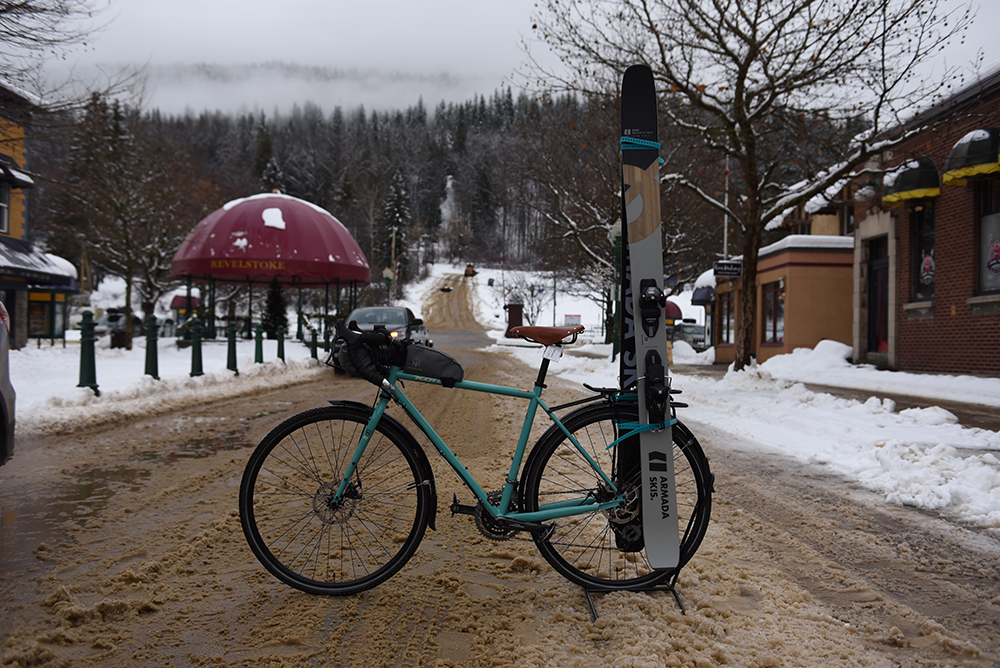 This drop-bar from Kona will get you around town and to the ski hill. The bike has the essentials such as studded tires, and also extras to help keep you safe including stunningly bright headlight, straps for your skis and levers designed for ease of use in gloves. Throw in ski straps and a rack and you can A-frame it to RMR. 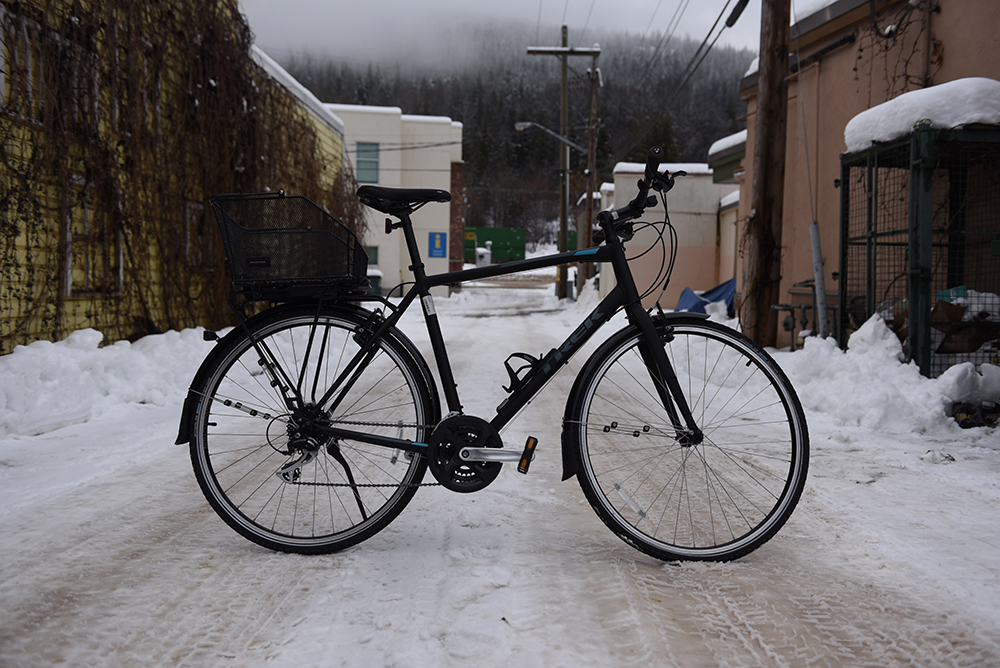 Tantrum set up an economical Trek FX2 commuter, showing that a winter ride with all the bells, whistles and vital safety accessories doesn’t have to set you back a fortune. This bike comes in around $1,200 with taxes including fenders, pump, rack, lights and more. 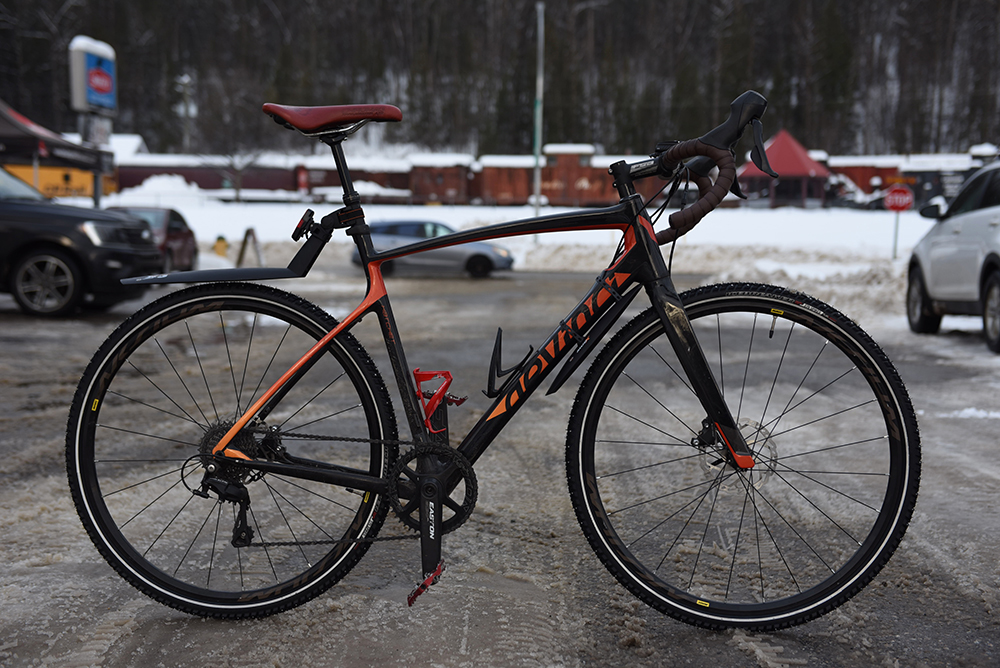 Flowt’s winter commuter is a drop-bar from Devinci, which can double as a touring rig in the summer. The 500-lumen USB rechargeable headlamp from Swift will light up your path and let drivers know you’re on the road. The studded tires by Icebreaker have a medium-range stud count, balancing speed and traction with grip.