This story first appeared in print in Revelstoke Mountaineer Magazine. It was published prior to the opening of the new Kovach Park skatepark in Revelstoke.

The much-anticipated Revelstoke skatepark is set to open in the coming month — and, for a sport that has for a long time been male-dominated, we can’t help but notice and delight in the deafening number of female skaters getting into the sport these past couple years. From more local girls starting out around town to all-female skate comps appearing in bigger cities, there’s no denying the sport is evolving. This makes for a more diverse, accessible game. It also means better film parts and better tricks.

Kate Ediger, who’s been skateboarding and teaching the sport since the age of 14, works as a photographer and snowboard tail guide for K3 Cat Ski. Ediger is also an ambassador for RMR, Avalanche Canada, and Burton Snowboards. On many occasions, Ediger found herself being the only female competitor in skateboard competitions, but believes this standard is changing. “In general, even beyond skateboarding, girls are stepping out of the norms, trying bigger things, and changing the entire ‘man’s industry,’” she reflects. “I’ve seen a lot of people determined to progress the sport.”

For a long time, skateboarding has been a boys’ club, says Ediger. Never before has she had so many girls with whom to skateboard — one of them being Coralie Foucher, who learned how to skateboard a few summers back in Santa Cruz. We sat down with both local girls to find out when they got into the sport and what excites them most about more women getting into it.

When did you first start skating?

Coralie: Two years ago in California. I would go to skateparks with my boyfriend and I would sit on the sidelines and I found that really lame. So I decided I’d try it too. There were never any girls at first, and that’s changing! 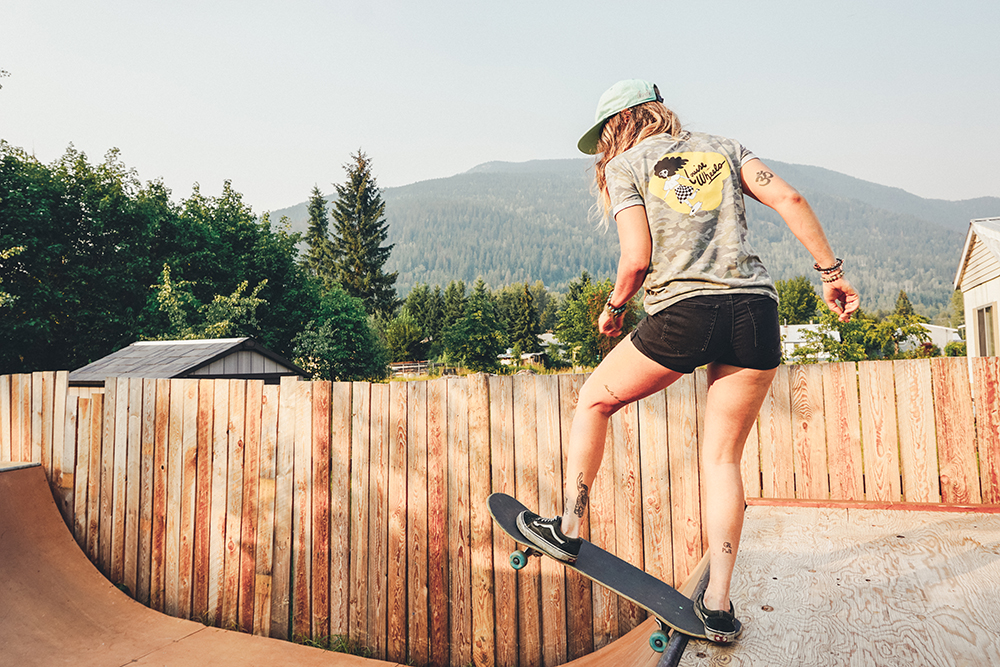 Are you progressing more now that you have a girl crew?

Coralie: Since I’ve been in Revelstoke I’ve had way more girlfriends skating than ever before. We’re all cheering each other on, we’re always together, and it’s pushing us to try news things.

All that practice is paying off as @c_rale drops into the bowl yesterday at the Revy skate park opening! 📸 @bambibacon ⠀ ⠀ ⠀ #louiseonwheels#skateboard#skategang#skatergirl#girlgang#skateordie#skateboarder#streetstyle#skatepark#miniramp#skatelife#explorebc#kootenaylife#therealstoke#grlpwr#badassgirls

What has your experience been as a female skater?

Kate: It has always been pretty special! When I was younger people thought it was crazy that I liked it so much. I was always being called a tomboy. If I entered a contest I was always the only girl. I admired girls who could skate well and push themselves. Back then we were not even comparable to the guys and now girls are skating way harder, with more style and grace.

What do you love most about the growing number of girls skating?

Coralie: It’s Louise on wheels! My crew of skater girls. They’re making skating so fun for me. And there’s so many new people coming to skate with us these days. We’re pushing each other, having fun. I’ve never had that before.

How will the skate industry have to adapt to accommodate this boom in female skaters?

Coralie: I don’t think it will. It’s so big right now. So many girls are learning to skate. It’s happening naturally. Even when it comes to fashion, it’s the fashion industry that’s adapting to skating. I love it.

Do you think skating loses some of its essence as it grows mainstream, or is that a positive to you?

Kate: I have only seen skateboarding being a positive in my life. It’s always been an individual sport that was social and fun. Like-minded people come together to cheer each other on or to push themselves in whatever stage they are at. I’ve seen and also built such a rad community from skateboarding and it’s been such a positive influence on my life.

Who are your biggest inspirations?

Kate: Patti McGee, the first female pro skateboarder, because of who she was in the sport. My dad, who taught me how to skateboard, would say, “Kate, you’re just a mini Patti.” I finally met her and we connected instantly because there weren’t many of us!

Is the boom in girls skating pushing the sport?

Kate: I believe it is! I’m watching girls skate so hard and trying tricks I’ve never seen before. It’s inspired me, even though I’m a mom, to want to progress and push myself more than ever this year! It’s such an exciting time to be a female!

Do you have a fave trick?

Kate: There is nothing I love more than carving in a bowl.

Before we know it the Revelstoke skatepark will have re-opened. Both Ediger and Foucher are excited to have a dedicated meet-up, and to hopefully meet another slew of girls giving the sport a go. “The bowls are calling my name,” laughs Ediger, who can’t help but show her enthusiasm when talking skateboarding.