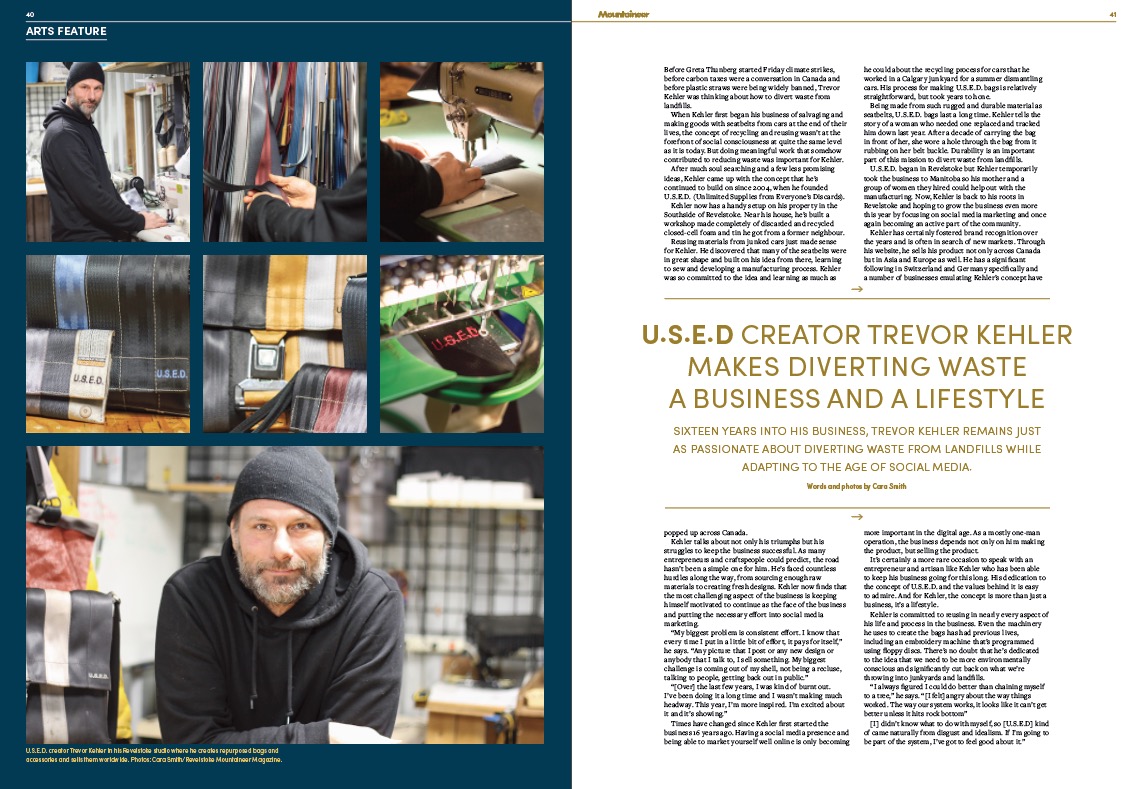 This story first appeared in print in the February 2020 issue of the Revelstoke Mountaineer Magazine.

Before Greta Thunberg started Friday climate strikes, before carbon taxes were a conversation in Canada and before plastic straws were being widely banned, Trevor Kehler was thinking about how to divert waste from landfills.

When Kehler first began his business of salvaging and making goods with seatbelts from cars at the end of their lives, the concept of recycling and reusing wasn’t at the forefront of social consciousness at quite the same level as it is today. But doing meaningful work that somehow contributed to reducing waste was important for Kehler.

After much soul searching and a few less promising ideas, Kehler came up with the concept that he’s continued to build on since 2004, when he founded U.S.E.D. (Unlimited Supplies from Everyone’s Discards).

Kehler now has a handy setup on his property in the Southside of Revelstoke. Near his house, he’s built a workshop made completely of discarded and recycled closed-cell foam and tin he got from a former neighbour.

Reusing materials from junked cars just made sense for Kehler. He discovered that many of the seatbelts were in great shape and built on his idea from there, learning to sew and developing a manufacturing process. Kehler was so committed to the idea and learning as much as he could about the recycling process for cars that he worked in a Calgary junkyard for a summer dismantling cars. His process for making U.S.E.D. bags is relatively straightforward, but took years to hone.

Being made from such rugged and durable material as seatbelts, U.S.E.D. bags last a long time. Kehler tells the story of a woman who needed one replaced and tracked him down last year. After a decade of carrying the bag in front of her, she wore a hole through the bag from it rubbing on her belt buckle. Durability is an important part of this mission to divert waste from landfills.

U.S.E.D. began in Revelstoke but Kehler temporarily took the business to Manitoba so his mother and a group of women they hired could help out with the manufacturing. Now, Kehler is back to his roots in Revelstoke and hoping to grow the business even more this year by focusing on social media marketing and once again becoming an active part of the community.

Kehler has certainly fostered brand recognition over the years and is often in search of new markets. Through his website, he sells his product not only across Canada but in Asia and Europe as well. He has a significant following in Switzerland and Germany specifically and a number of businesses emulating Kehler’s concept have popped up across Canada.

Kehler talks about not only his triumphs but his struggles to keep the business successful. As many entrepreneurs and craftspeople could predict, the road hasn’t been a simple one for him. He’s faced countless hurdles along the way, from sourcing enough raw materials to creating fresh designs. Kehler now finds that the most challenging aspect of the business is keeping himself motivated to continue as the face of the business and putting the necessary effort into social media marketing.

“My biggest problem is consistent effort. I know that every time I put in a little bit of effort, it pays for itself,” he says. “Any picture that I post or any new design or anybody that I talk to, I sell something. My biggest challenge is coming out of my shell, not being a recluse, talking to people, getting back out in public.”

“[Over] the last few years, I was kind of burnt out. I’ve been doing it a long time and I wasn’t making much headway. This year, I’m more inspired. I’m excited about it and it’s showing.”

Times have changed since Kehler first started the business 16 years ago. Having a social media presence and being able to market yourself well online is only becoming more important in the digital age. As a mostly one-man operation, the business depends not only on him making the product, but selling the product.

It’s certainly a more rare occasion to speak with an entrepreneur and artisan like Kehler who has been able to keep his business going for this long. His dedication to the concept of U.S.E.D. and the values behind it is easy to admire. And for Kehler, the concept is more than just a business, it’s a lifestyle.

Kehler is committed to reusing in nearly every aspect of his life and process in the business. Even the machinery he uses to create the bags has had previous lives, including an embroidery machine that’s programmed using floppy discs. There’s no doubt that he’s dedicated to the idea that we need to be more environmentally conscious and significantly cut back on what we’re throwing into junkyards and landfills.

“I always figured I could do better than chaining myself to a tree,” he says. “[I felt] angry about the way things worked. The way our system works, it looks like it can’t get better unless it hits rock bottom”

[I] didn’t know what to do with myself, so [U.S.E.D] kind of came naturally from disgust and idealism. If I’m going to be part of the system, I’ve got to feel good about it.”