All Photos were taken by Alexi Mostert.

Ryan Krebs, owner and tattoo artist at Daruma Tattoo, is an extension of his art: timeless and honest. Much like the classic style of tattoos he loves, Ryan has stood the test of time in Revelstoke and is taking a leap by bringing a new experience to the town. Ryan is re-locating Daruma Tattoo and introducing flash tattooing to one of Revelstoke’s busiest streets.

Flash tattoos are pre-drawn designs, a staple in classic-style tattoo shops like Ryan’s and touristy areas. Tattoos are becoming increasingly popular, and nowadays, getting a tattoo on a whim is more common. With the shop’s new location at 2B 300, First Street West, Ryan hopes to harness that business.

For Ryan, the shop signifies a more significant shift in his life. Ryan wants to focus his career on flash and classic style tattooing.

“I love the classic stuff. It’s timeless,” Ryan says. His space is wallpapered with frames of traditional flash tattoo designs. “Classic” or “traditional” is the old-school American style of tattooing popularised around the 1930s that depicts iconic imagery. It incorporates bold lines and solid colours.

Tattoo cultures worldwide vary, and the permanent body decorations can even look different from province to province. The mountain silhouette, fern, or botanical bouquet are trends here in Revelstoke. Ryan’s classic flash shop seems a sharp contrast to the whimsical mountain town trend tattoos. He’s not out to bash anyone’s style, and he understands that his style isn’t for everyone either. He’s opening up a space for something different.

When the original Daruma Tattoo opened in Revelstoke, Ryan says some of his colleagues thought it was career suicide. “People normally build their careers and stay there,” he says. But he saw an opening and niche that needed filling in Revelstoke. “Established tattooers go to places where there’s no tattooing,” he says.

For a while, Ryan was the only person in town tattooing. He created a name and business for himself as a versatile tattoo artist. But Ryan felt burnt out trying to please everyone. While he is a diverse tattoo artist, he didn’t always feel the work represented his authentic self.

“As I get more mature and as I learn what I want to do with my time and energy, I realize that I can’t do every tattoo,” he says. “I used to portray myself as a really versatile tattooed. In Revelstoke, because it has so many different types of people, I would end up doing so many types of tattoos, and it kind of burned me out.”

Ryan has seen trends come and go but feels it’s time to carve a space for tattoo culture in Revelstoke and align his business with his beliefs by tattooing true to his style.

“It’s a business; you’re working for your client, you’re trying to please them and give them what they want,” Ryan explains. “And then there’s the other side, where you can’t be disingenuous to yourself and your skill set.”

The way Ryan sees it, it’s like asking a landscape artist to paint an abstract portrait; they could pull it off, but that’s not the work they want to put their name on.

“When you look at these classic designs, you see how there’s not much to them,” he says, gesturing to a flash design of a black panther. “They’ve drawn those so that over time when they age, it’s still gonna look like a panther.” 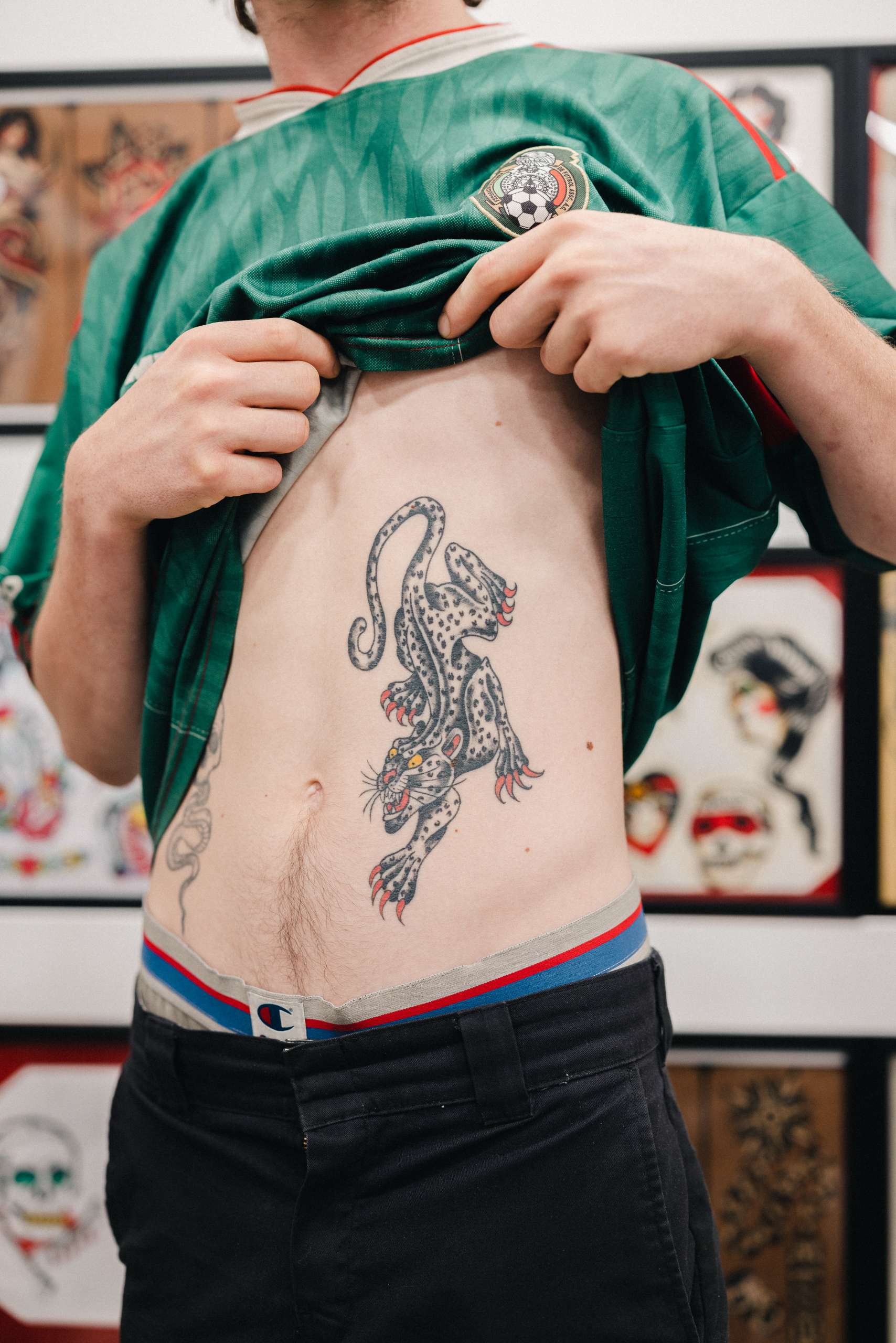 Regarding longevity, Ryan doesn’t believe in tattooing something that won’t stand the test of time. The way traditional designs age is something that makes him proud of the art he creates.

Social media portrays trends of small and detailed tattoos, but he says it’s unlikely that those tattoos will age the way clients want.

“I’m really adamant about designs lasting because I personally think, what’s the point of spending all this money, trying to get something timeless, and then it’s not timeless?” he says. “Tattoos are forever. They just don’t last forever.” 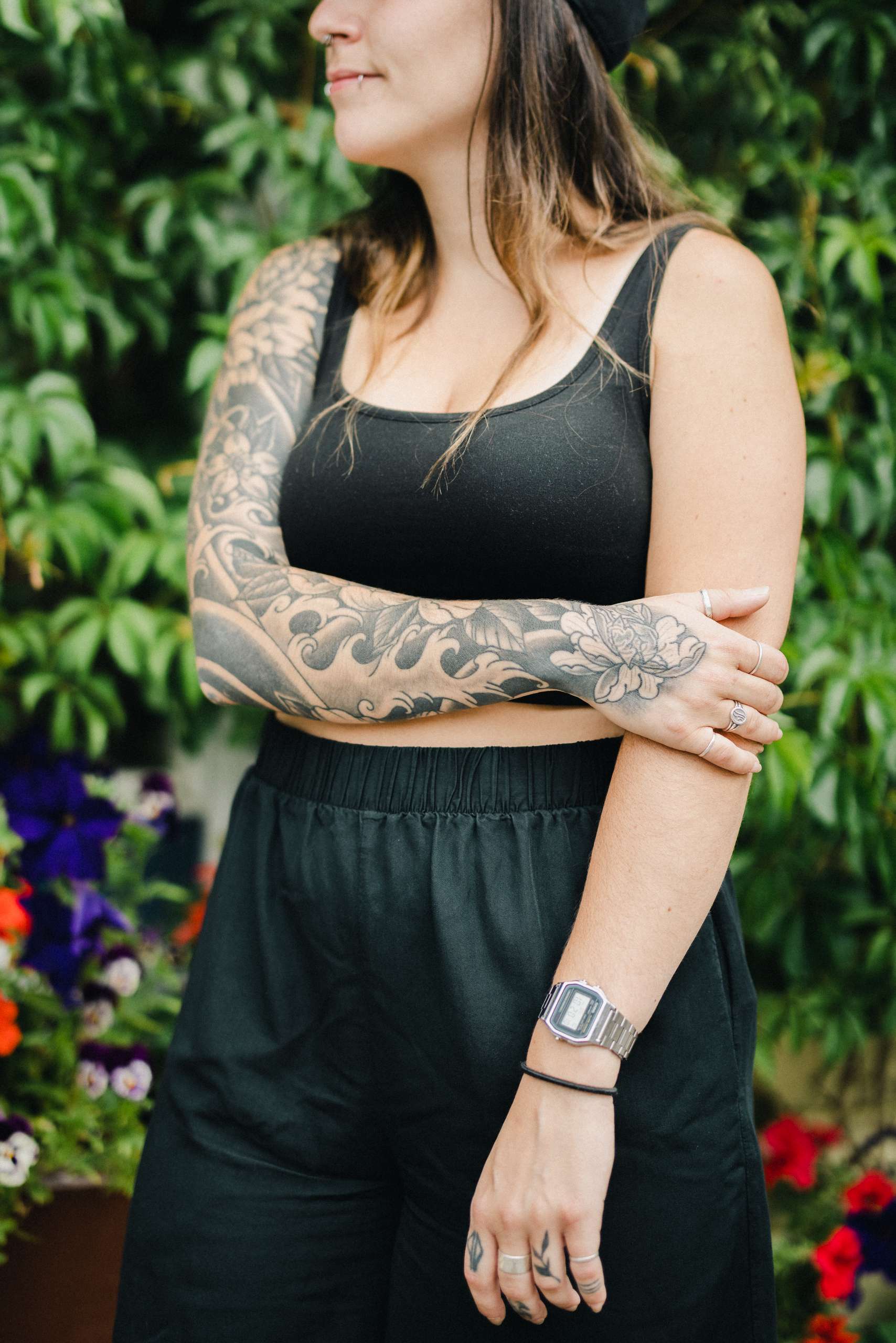 Ryan has hung more traditional-style tattoos in the shop and switched his social media channels to display traditional tattoo content to ease his business in that direction.

“I just feel like what I sell and what I’m confident doing — and it’s not for everyone — but you get to a point where you love what you do, and you say, you know what, I’ve tried so many styles of tattooing, I really have the most fun doing these ones,” he says.

“The main objective for me would be good, honest tattooing,” Ryan explains. “I want people to like my art, and I want them to like me as a person too.”

While Ryan hopes to introduce flash tattooing to Revelstoke through his new street shop, he’s not opposed to doing custom tattoos. He values clients that come to him with original ideas.

“When people message me on social media, I tell them to go check out my flash up for grabs area.” He says that if nothing catches their eye, he’s down to draw something original, but he’d like to meet in the middle and infuse his style into the work. “Custom tattooing is our interpretation of your idea,” he says. 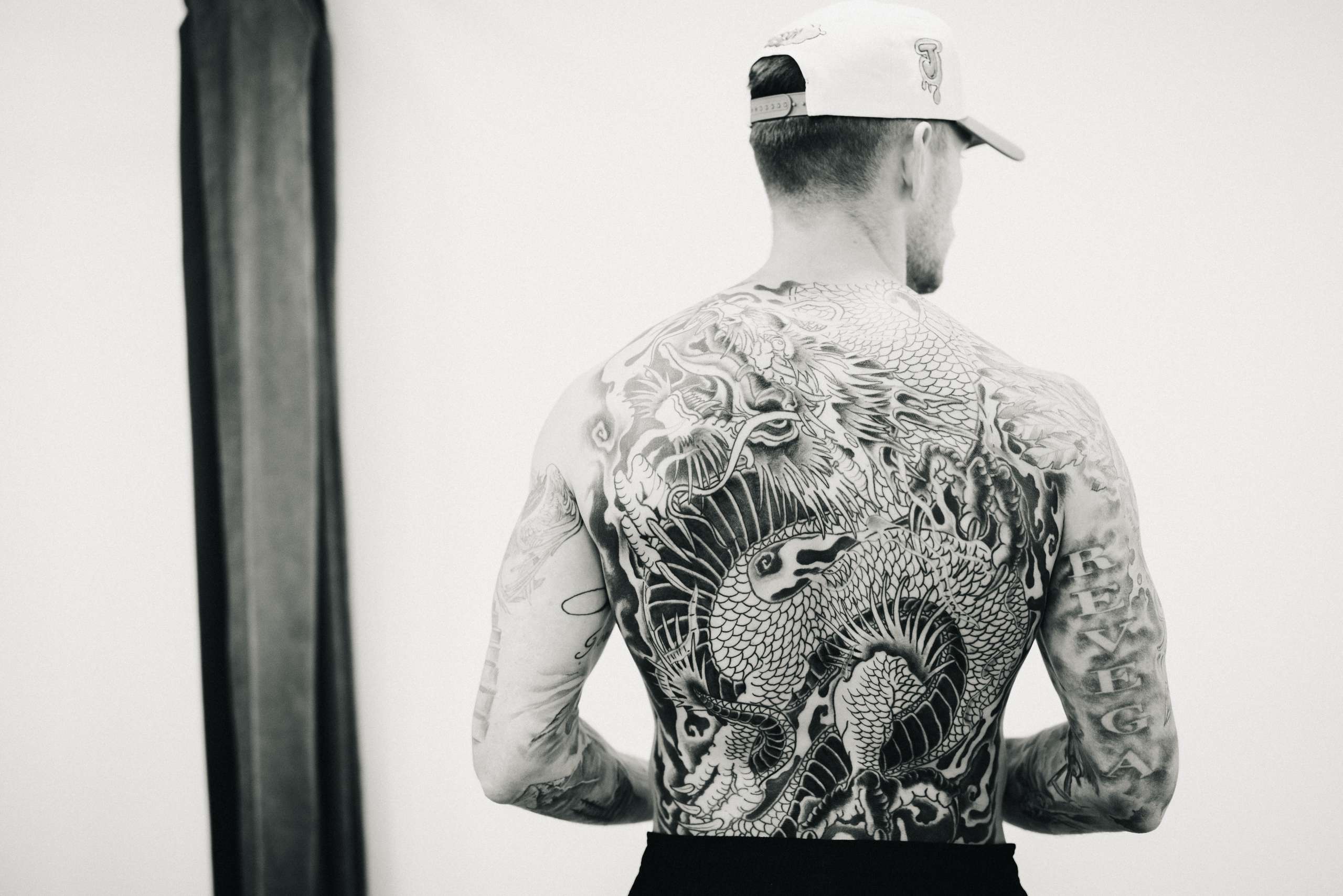 He’s adamant that every artist has their style. Traditional is his niche. “If I’m not the right guy for you, I’m not going to get hurt; I’m going to help you find the right tattooer or let’s tweak the design. What I’m not willing to do is tweak it, and it turns it into a shitty tattoo,” he says.

Ryan will invite guest artists to his shop. He describes the town as having a closed tattoo scene because it can be challenging to move to Revelstoke. 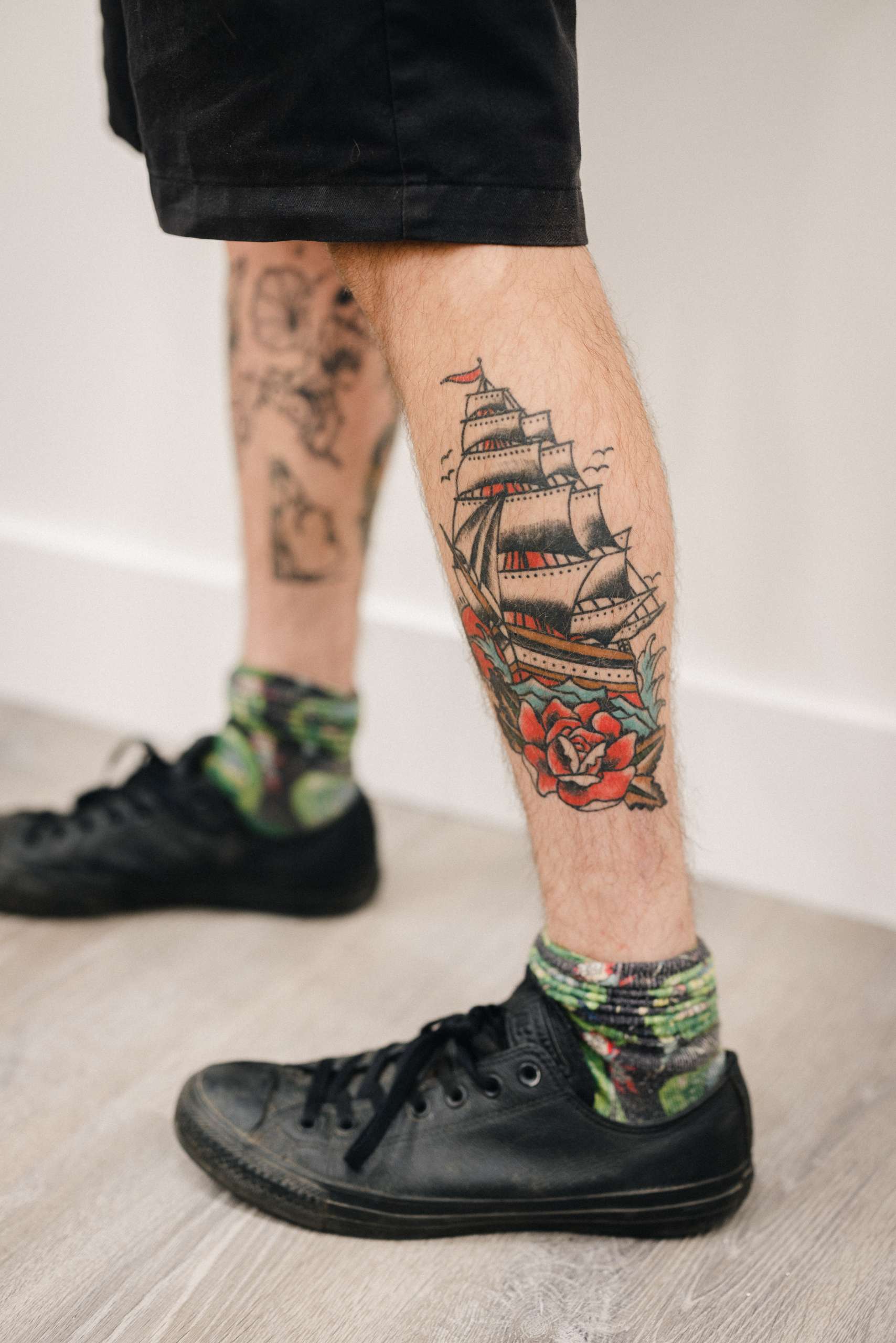 Daruma is co-locating with Brick House Hair and Vintage, owned by his partner, Lindy Delaurier. The shop features a vintage clothing shop, hair salon and Tattoo parlour. The unique concept is a new step for Daruma Tattoo and Brickhouse Hair and Vintage. The creative, collaborative space reflects Ryan and Lindy’s passion for vintage. Despite working in different industries, Lindy says they both work with people. She thinks the two businesses working symbiotically make the space more approachable. 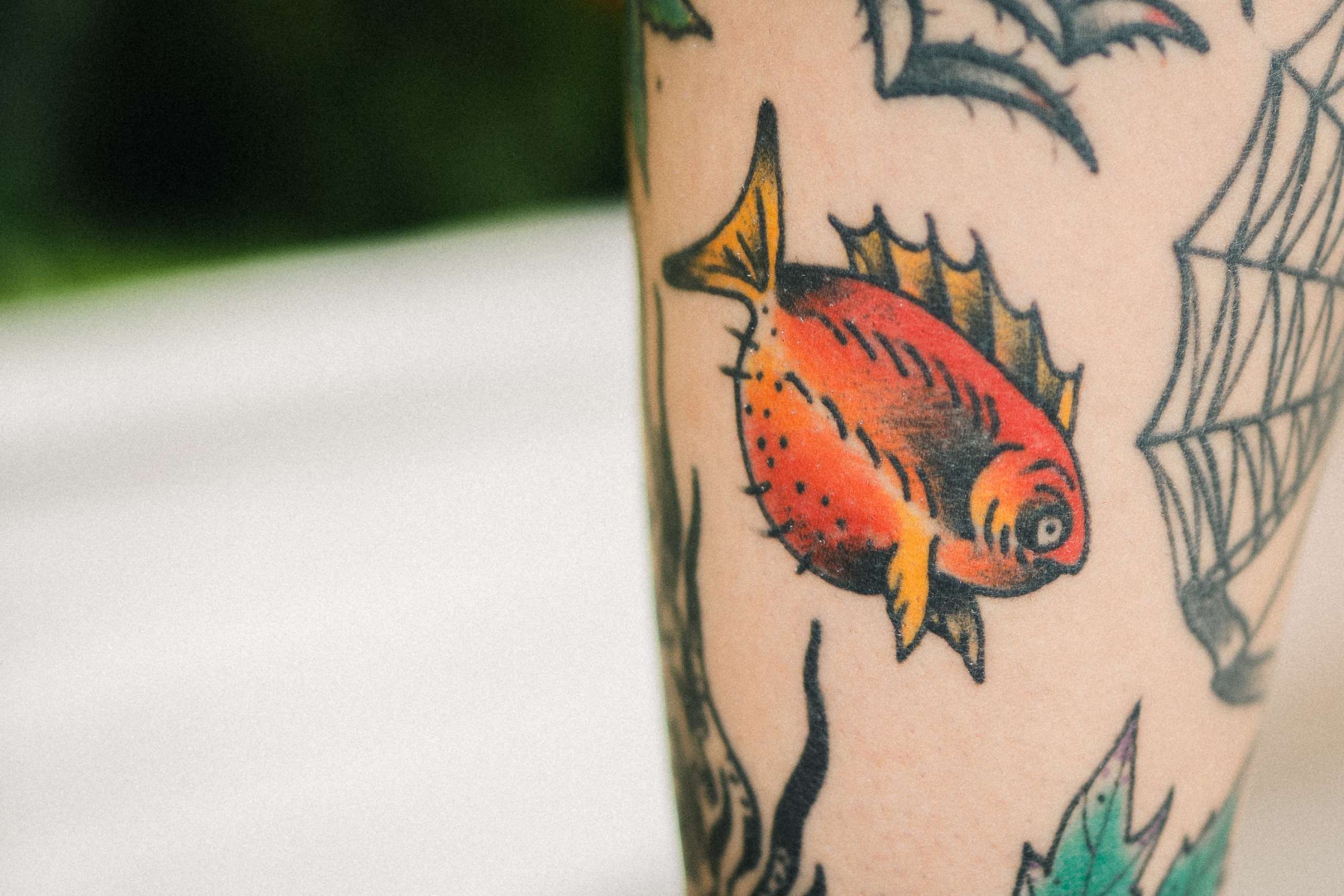 Tattooing is Ryan’s life, and he’s built that in the Revelstoke community. The new shop will be an inviting, welcoming showcase for his art.

“I love all the aspects {of the job}, being able to do my art, being able to be respected and viewed as a part of this small community, and just having people give me their honest earned money,” Ryan says. “I take it really seriously. So I do my very best.”

*Correction: Ryan’s shop is not currently accepting walk-ins for flash tattooing. This is a goal down the road in conjunction with other tattoo artists.

Revelstoke resident Carol Palladino has been a key

It's easy to romanticize the idea of living and wo