Since the inaugural summer festival in 2013 there has been over 100 artists to grace the stages of Golden Sound Festival including; Yukon Blonde, Five Alarm Funk, Bright Light Social Hour, The Dudes, We Are the City, Head of the Herd, Shred Kelly and many more. Beginning as what was known as the “Block Party”, a multi-venue style festival in the likes of SXSW, Rifflandia & CMW. Artistic director Todd Menzies has curated a diverse lineup each year, to make this boutique festival stand out among the many summer festivals across western Canada. Being one of the only festival to run bi-annually; with summer and winter festivals every six months, and to include every genre from folk, punk, electronic dance music, and everything in between. 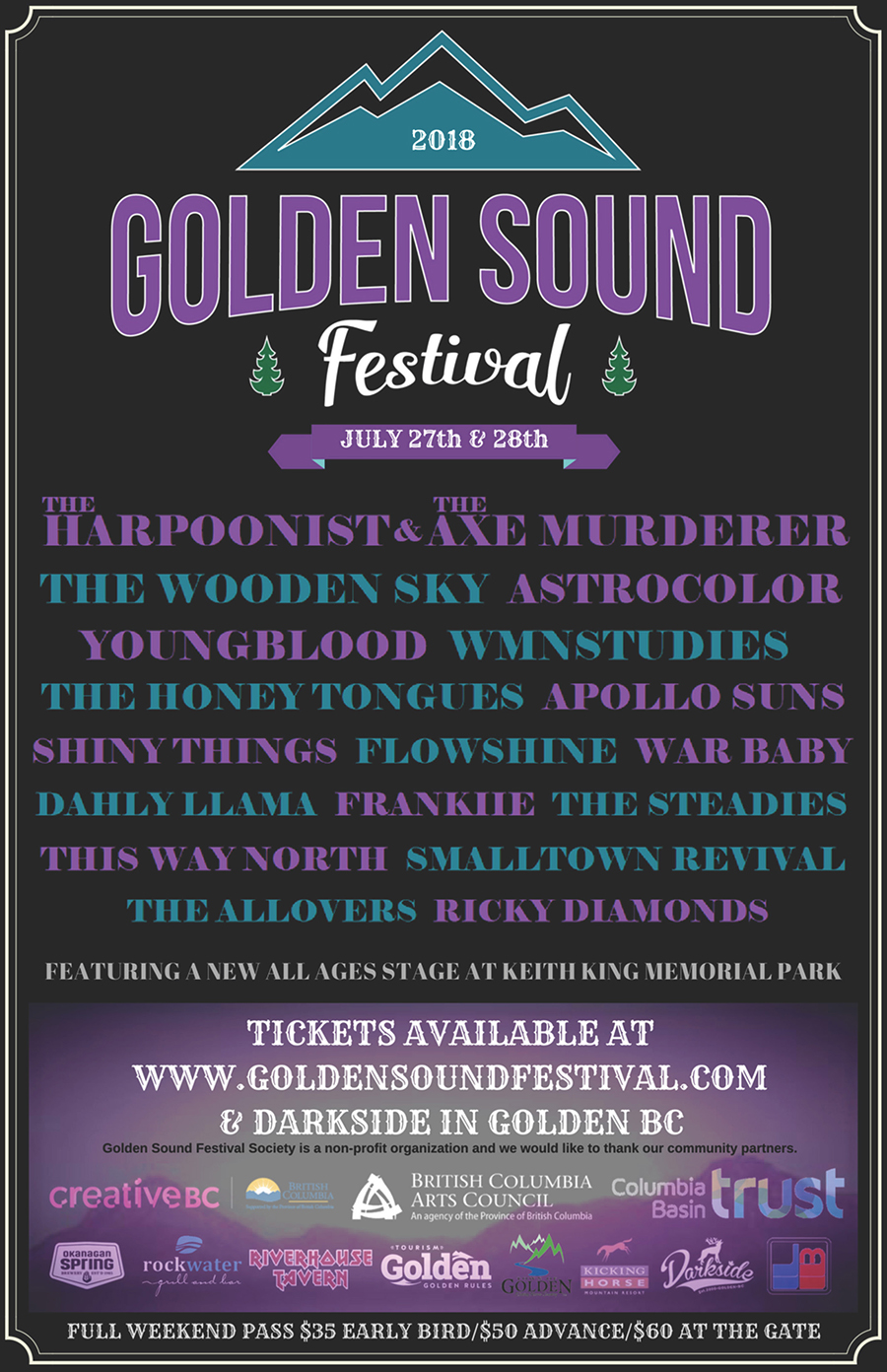 Summer 2018 will bring a big change for Golden Sound Festival. With the financial support of Creative BC, BC Arts Council & Columbia Basin Trust; the festival will be expanding to an all age, family friendly, main outdoor stage, located at Keith King Memorial Park. Situated on top of Selkirk Hill, the festival will overlook the town of Golden, with the glorious view of Kicking Horse Mountain in the background. Headliners The Harpoonist & the Axe Murderer are schedule to close out the main stage, along with: The Wooden Sky, The Honey Tongues, Apollo Suns, Flowshine, Frankiie, and Golden locals Small Town Revival. The main stage will be hosted by the infamous Ricky Diamonds.

With a wide variety of food trucks, local artisans and a beer garden hosted by Okanagan Spring Brewery, there will be no reason to leave the festival grounds all day. Gates open at 11 a.m., with music beginning at 12 p.m. and concluding at 10 p.m., and gates closing at 11 p.m. As the sun sets on the main stage, the festival will continue in the downtown venues of The Rockwater & The Riverhouse. With the two venues proximity being a stone throw away, allowing festival goers the opportunity to bounce back and fourth and catch the likes of: Astrocolor, Youngblood, Wmnstudies, War Baby, Shiny Things, The Allovers, The Steadies, This Way North & Dahly Llama. (Note: Evening venues are 19+)

Festival organizers are focused on bringing more than just music lovers to town though. Golden offers some of the most elite outdoor entertainment in the country including: rafting on Kicking Horse River, rock climbing, paragliding from Mount 7, and world class mountain biking on Kicking Horse Mountain Resort. Teaming up with both Kicking Horse Mountain Resort and Tourism Golden, they hope to expand the allure of not only the music festival but the appeal of what the town has to offer to make the weekend one to remember for the whole family.

Tickets are available online at goldensoundfestival.com or in person at Darkside (517 9 Ave N) in Golden. Full Festival Passes (includes access to Keith King Memorial Park & evening venues all weekend long) are $50 in advance or $60 at the gate. An Evening Pass (valid for entry into The Rockwater & The Riverhouse; Friday and Saturday night) is available for the low price of $20. We also offer a daytime pass for Keith King Memorial Park only, for $40. Kids 12 and under are free with an accompanying adult. For further information, full lineup, and complete schedule visit www.goldensoundfestival.com.