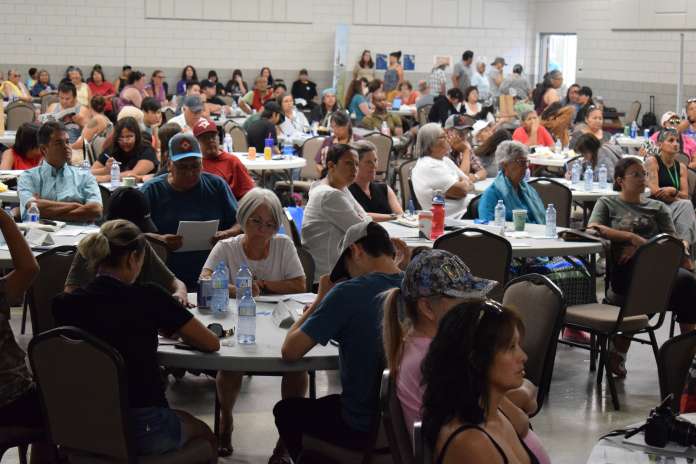 The Revelstoke Community and Aquatic Centre was the venue for the Syilx Okanagan Nation Alliance (ONA) annual general meeting. Members of the seven Okanagan bands on this side of the U.S. border met for three days, July 26–28, 2022, to discuss important issues.

Ki law na (y̓il̓mixʷm Clarence Louie), Chief of the Osoyoos Indian Band and ONA Tribal Chair, explained in an interview with Mountaineer staff that every tribal group has a tribal council that meets consistently throughout the year to discuss common issues off of the reserves. These issues span land, hunting, fishing, nation rights and land rights issues. They also convene to deal with matters involving the provincial and federal governments.

Committees take on these issues regularly, and the annual meeting is where the ONA can formally come together. For example, committees such as the natural resources committee, wellness committee and child services committee helped to develop a program for the annual general meeting.

Louie says that new issues are also given a platform at these events, and discussions often arise about advancing the nation’s title and rights in their traditional territory.

Louie says the meeting’s agenda deals with aboriginal title, rights, and child and family services. This year’s conference witnessed the signing of the ax. iʔ sccuntət iʔ tl x̌aʔx.tət x̌l iʔ nəqsil̓tət (Family Declaration). The declaration was developed over the last two years by Language Speakers and Elders throughout the Nation, according to a press release following the annual event.

The ONA media release says the declaration upholds Syilx laws and affirms the rights and responsibilities of the people to have the ability to protect the health and well-being of the nation’s children and families.

“Injustices against our children and our families continue to be perpetrated on territory,” Louie states in the release. “We are calling on the Province and the Government of Canada to adhere to this Declaration and recognize our inherent rights and responsibilities to take care of our children and families on our own terms and in our own way.”

When asked why Revelstoke was this year’s host, Louie says the answer goes beyond just deciding on a place to gather. Revelstoke is home to ONA’s ancestors, and it’s a place where they can be connected to that history. Louie says that the ONA decided to host the meeting at different venues throughout the traditional territory. He says the ONA has never held their annual meeting in Revelstoke. Revelstoke is part of Syilx traditional territory and has Okanagan place names in the region.

“We move the AGM around different venues in our territory,” Louie explains. “Sometimes it’s on the actual Indian reserves themselves. Sometimes we just host it where our reserves aren’t anymore, but where traditionally, our people did fish, work, and play.”

A media release stated that the importance of hosting this year’s gathering in the Northeastern part of the Syilx territory was a recurring topic of conversation at the meeting.

“By journeying out and having our Elders and Youth being on the land together to share in our Syilx history, stories, language, and perspectives, we are working to ensure that these connections continue to be handed down for generations to come. Alongside pertinent presentations and dialogues, there was also a variety of cultural activities taking place, including on-the-land tours to Syilx ancestral villages and places of cultural significance,” said ONA staff in the release.

Basecamp Resorts Ltd breaks ground on their new do

A three-person task force appointed to look into R

Parks Canada says a wildfire was detected in Glaci