This article first appeared in print in the August 2019 issue of Revelstoke Mountaineer Magazine.

I’ve played golf a few times in my life, 11 summers ago when I was living across the Columbia Mountains in Invermere. That part of the Columbia Valley is home to a dozen or so golf courses, so it was inevitable that two of our staff socials took place over golf. Both times I got about halfway through the front nine before yearning for the bar. The many, many whiffs, tees going further than the balls, the trees that kept getting in my way… It all made for an exercise in frustration.

When the Mountaineer challenged me to get out there and try a new Revelstoke activity, I figured – why not give golf another chance? I’d been out to the Revelstoke Golf Club many times in my years as a reporter, but never so much as swung a club. And I’d just written about disc golf, so it seemed fitting to try the real deal.

I arranged a lesson with Chance Beardsworth, the club’s associate professional, though we didn’t have much time together. The goal was to get me comfortable swinging the club at the driving range, then play a few holes to get a feel for the course.

We met on a Monday with the skies threatening rain but never letting out more than a trickle. Dean Jackson, the club’s general manager was working in the office, and was happy to let me know that membership had nearly doubled to 270 this year thanks to a generous promotion to sign up new members. The club also received $50,000 in funding from the City of Revelstoke, further helping bolster its operation. And it’s benefitted from Revelstoke’s recent tourism boom, Dean said.

The appeal of the Revelstoke Golf Club is two-fold. First is its location straddling the Columbia River and the views it offers of the Selkirk and Monashee Mountains. Second is its history, which makes it a unique course, shaped by its surroundings, rather than

The club has a rich history that began in 1898 century when a group of locals decided to create a signature park on a peninsula of the land jutting out into the Columbia River. In 1908, the Revelstoke Turf Association built a horse racing track, where the current back nine is location. The distinct cupola that is perched atop the clubhouse was the home of the race callers, while gambling took place in the men’s room on the second floor. The remains of the track are visible in the elevated berms that were seamlessly integrated into the course.

The golf course was built in 1924, with the track converted into the current back-nine. The Labour Day classic, which is being hosted for the 89th time this summer, started not long after; it’s the longest running amateur golf tournament in British Columbia. The shining moment in those early years was when Hollywood star Richard Arlen set the course record in 1936 while filming the movie The Great Barrier in Revelstoke. He donated what’s now known as the Arlen Cup to the club 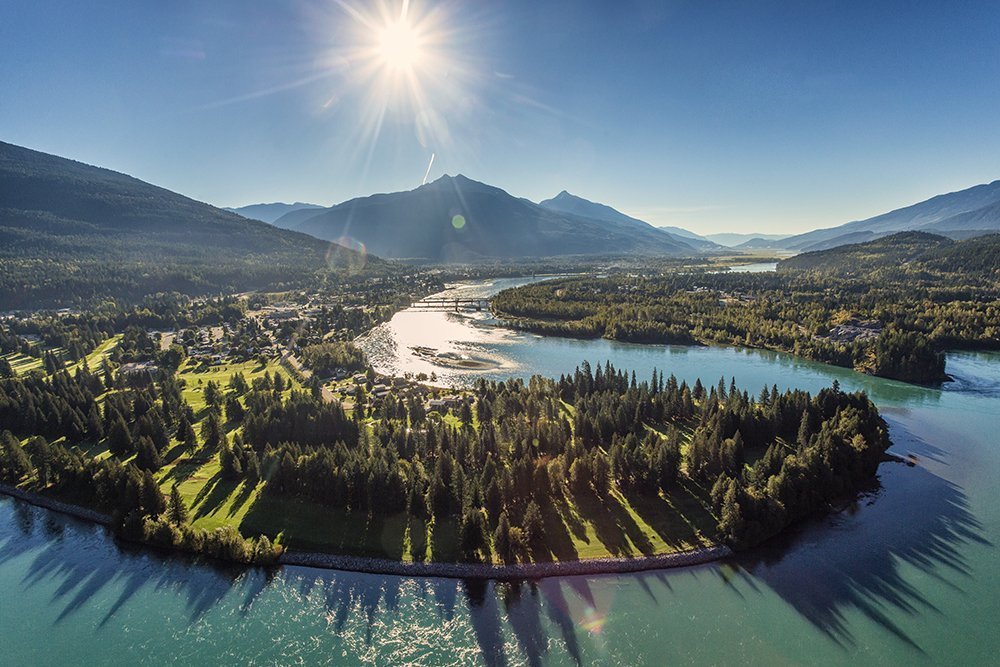 In 1974, golf course architect Norman Woods transformed the club into an 18-hole course stretching out across the peninsula into the river. The signature sixth hole straddles the banks of the Columbia and provides the best of many incredible views the club is known for – a strong drive causing balls to get lost in the backdrop of Mount Begbie.

Today, the Revelstoke Golf Club is a full 18 holes straddling the Columbia River. When the area was first turned into a park 120 years ago, the locals chose the location because they thought it was the most beautiful spot in Revelstoke. You wouldn’t be wrong for claiming the same today.

Of course, my eyes were mostly on that little white ball. Keep your eye on the ball, I was warned repeatedly while standing in the driving range, trying to focus, relaxing my arms, and arcing them skyward. Usually I’d top the ball, sending it bouncing harmlessly away, or I’d dig up the grass, or just miss entirely. Occasionally I’d send the ball skyward, and even more rarely in the right direction. Despite Chance’s best coaching, I could rarely repeat. “You looked up a millisecond too soon,” I was advised after multiple flubs.

Were this a normal lesson, we’d spend several hours on over a period of days on the driving range honing my swing, but this was a crash course, so after about 30 minutes we jumped in the cart and drove to the first hole, teeing off with Mount Begbie as our target. I liked the freedom of the open range and the elegant conifers lining the course had a magnetic attraction to my ball, especially with my tendency to slice it to the left. We adjusted my stance slightly to the right to account for that, so naturally I hit that one straight.

We only played the first two holes, lacking time to go out to the signature sixth hole, which goes right to the point of the peninsula, or the ninth and tenth, which straddle the river, devouring hundreds of balls every season. Chance was a generous instructor, happily kicking my ball out of the woods and onto the fairways for me, allowing me unlimited mulligans. That’s one of his pet peeves with how a lot of people play golf – they’re sticklers for the rules and forget it’s supposed to be fun, not frustrating, which is generally how I’ve found the sport in my few feeble attempts at it. Him and Dean Jackson have been trying to change that mindset to get more people involved in the sport, especially youth. They offer discounted memberships to adults under 40, and free golf for youth under 18. It’s part of their effort to dispel the notion golf is an old person’s game.

It did remind me of the time I was reporting on the club and was given some advice: “Learn to play golf when you’re young. That way you’ll be good when you’re older and can’t do anything else.”

Will I go back? There’s a free locals’ day in early September, so I see a good chance to give it another go.