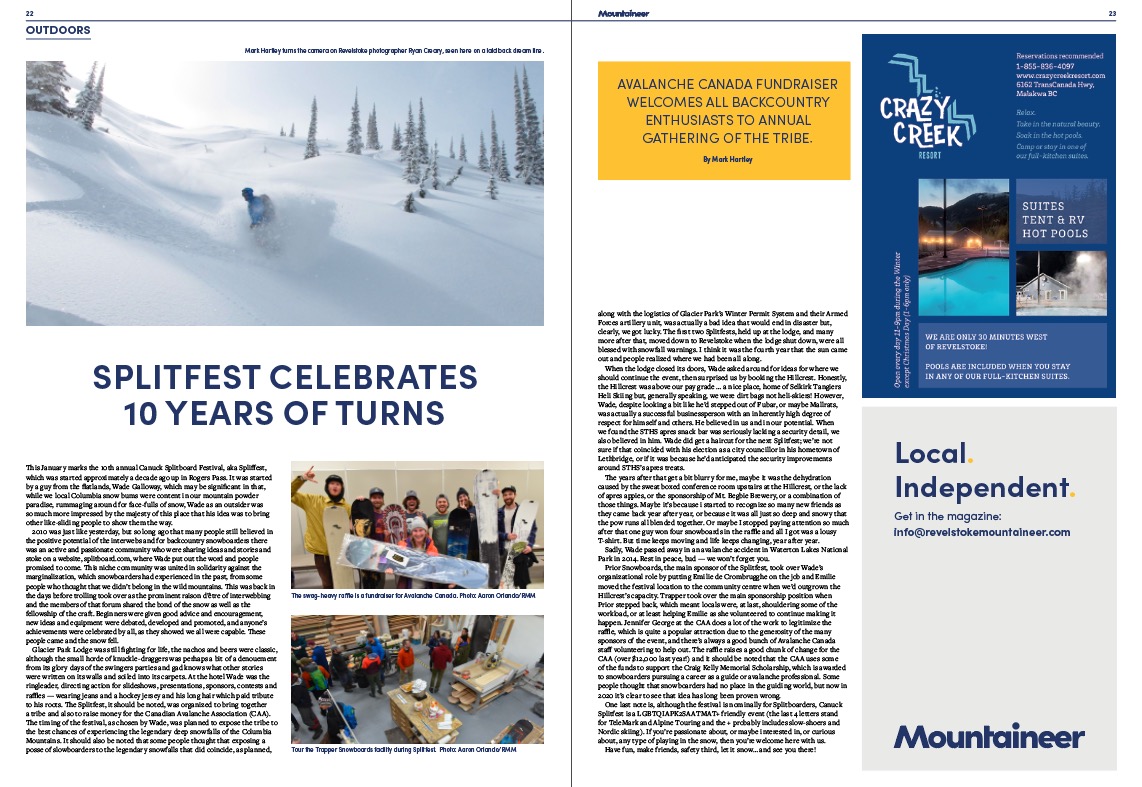 This article first appeared in the January 2020 issue of Revelstoke Mountaineer Magazine.

This January marks the 10th annual Canuck Splitboard Festival, aka Spliffest, which was started approximately a decade ago up in Rogers Pass. It was started by a guy from the flatlands, Wade Galloway, which may be significant in that, while we local Columbia snow bums were content in our mountain powder paradise, rummaging around for face-fulls of snow, Wade as an outsider was so much more impressed by the majesty of this place that his idea was to bring other like-sliding people to show them the way.

2010 was just like yesterday, but so long ago that many people still believed in the positive potential of the interwebs and for backcountry snowboarders there was an active and passionate community who were sharing ideas and stories and stoke on a website, splitboard.com, where Wade put out the word and people promised to come. This niche community was united in solidarity against the marginalization, which snowboarders had experienced in the past, from some people who thought that we didn’t belong in the wild mountains. This was back in the days before trolling took over as the prominent raison d’être of interwebbing and the members of that forum shared the bond of the snow as well as the fellowship of the craft. Beginners were given good advice and encouragement, new ideas and equipment were debated, developed and promoted, and anyone’s achievements were celebrated by all, as they showed we all were capable. These people came and the snow fell.

Glacier Park Lodge was still fighting for life, the nachos and beers were classic, although the small horde of knuckle-draggers was perhaps a bit of a denouement from its glory days of the swingers parties and gad knows what other stories were written on its walls and soiled into its carpets. At the hotel Wade was the ringleader, directing action for slideshows, presentations, sponsors, contests and raffles — wearing jeans and a hockey jersey and his long hair which paid tribute to his roots. The Splitfest, it should be noted, was organized to bring together a tribe and also to raise money for the Avalanche Canada The timing of the festival, as chosen by Wade, was planned to expose the tribe to the best chances of experiencing the legendary deep snowfalls of the Columbia Mountains. It should also be noted that some people thought that exposing a posse of slowboarders to the legendary snowfalls that did coincide, as planned, along with the logistics of Glacier Park’s Winter Permit System and their Armed Forces artillery unit, was actually a bad idea that would end in disaster but, clearly, we got lucky. The first two Splitfests, held up at the lodge, and many more after that, moved down to Revelstoke when the lodge shut down, were all blessed with snowfall warnings. I think it was the fourth year that the sun came out and people realized where we had been all along.

When the lodge closed its doors, Wade asked around for ideas for where we should continue the event, then surprised us by booking the Hillcrest. Honestly, the Hillcrest was above our pay grade … a nice place, home of Selkirk Tangiers Heli Skiing but, generally speaking, we were dirt bags not heli-skiers! However, Wade, despite looking a bit like he’d stepped out of Fubar, or maybe Mallrats, was actually a successful businessperson with an inherently high degree of respect for himself and others. He believed in us and in our potential. When we found the STHS apres snack bar was seriously lacking a security detail, we also believed in him. Wade did get a haircut for the next Splitfest; we’re not sure if that coincided with his election as a city councillor in his hometown of Lethbridge, or if it was because he’d anticipated the security improvements around STHS’s apres treats.

The years after that get a bit blurry for me, maybe it was the dehydration caused by the sweat boxed conference room upstairs at the Hillcrest, or the lack of apres appies, or the sponsorship of Mt. Begbie Brewery, or a combination of those things. Maybe it’s because i started to recognize so many new friends as they came back year after year, or because it was all just so deep and snowy that the pow runs all blended together. Or maybe I stopped paying attention so much after that one guy won four snowboards in the raffle and all I got was a lousy T-shirt. But time keeps moving and life keeps changing, year after year.

Sadly, Wade passed away in an avalanche accident in Waterton Lakes National Park in 2014. Rest in peace, bud — we won’t forget you.

Prior Snowboards, the main sponsor of the Splitfest, took over Wade’s organizational role by putting Emilie de Crombrugghe on the job and Emilie moved the festival location to the community centre when we’d outgrown the Hillcrest’s capacity. Trapper took over the main sponsorship position when Prior stepped back, which meant locals were, at last, shouldering some of the workload, or at least helping Emilie as she volunteered to continue making it happen. Jennifer George at the Avalanche Canada does a lot of the work to legitimize the raffle, which is quite a popular attraction due to the generosity of the many sponsors of the event, and there’s always a good bunch of Avalanche Canada staff volunteering to help out. The raffle raises a good chunk of change for the Avalanche Canada (over $12,000 last year!) and it should be noted that the Avalanche Canada uses some of the funds to support the Craig Kelly Memorial Scholarship, which is awarded to snowboarders pursuing a career as a guide or avalanche professional. Some people thought that snowboarders had no place in the guiding world, but now in 2020 it’s clear to see that idea has long been proven wrong.

One last note is, although the festival is nominally for Splitboarders, Canuck Splitfest is a LGBTQIAPK2SAATMAT+ friendly event (the last 4 letters stand for TeleMark and Alpine Touring and the + probably includes slow-shoers and Nordic skiing). If you’re passionate about, or maybe interested in, or curious about, any type of playing in the snow, then you’re welcome here with us.

Have fun, make friends, safety third, let it snow… and see you there!