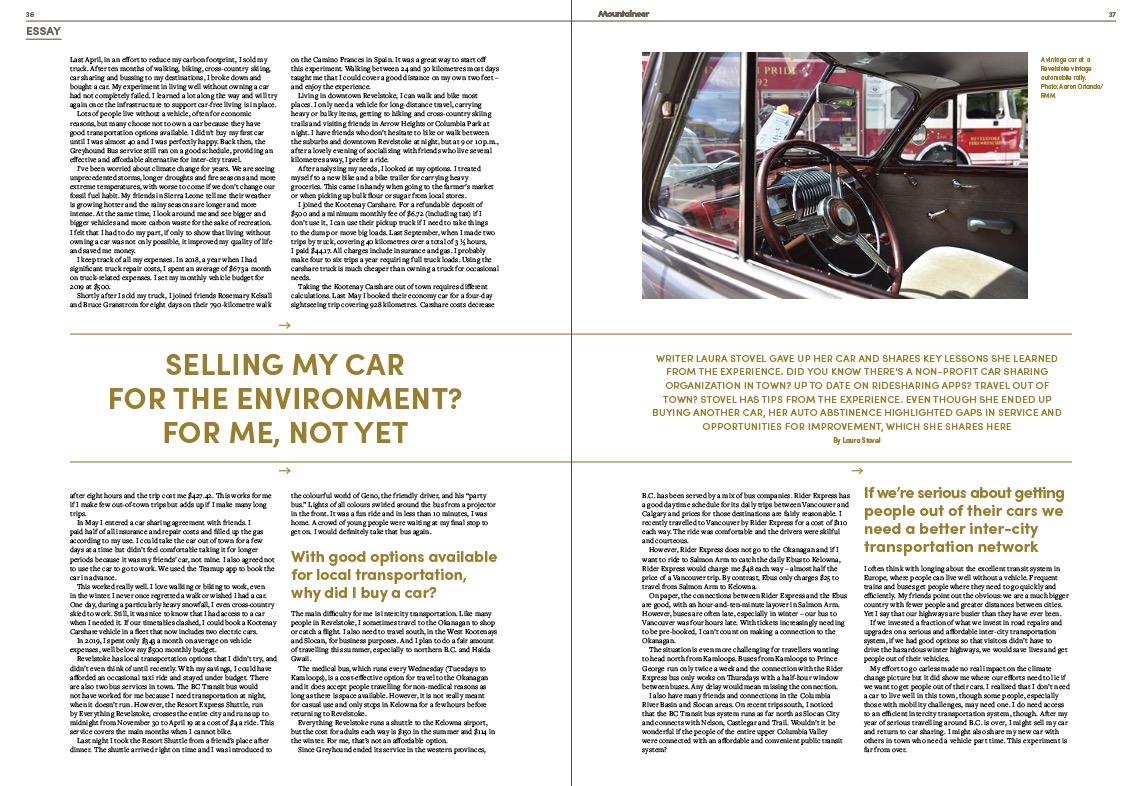 This article first appeared in print in the March 2020 climate emergency-themed issue of Revelstoke Mountaineer Magazine.

Last April, in an effort to reduce my carbon footprint, I sold my truck. After ten months of walking, biking, cross-country skiing, car sharing and bussing to my destinations, I broke down and bought a car. My experiment in living well without owning a car had not completely failed. I learned a lot along the way and will try again once the infrastructure to support car-free living is in place.

Lots of people live without a vehicle, often for economic reasons, but many choose not to own a car because they have good transportation options available. I didn’t buy my first car until I was almost 40 and I was perfectly happy. Back then, the Greyhound Bus service still ran on a good schedule, providing an effective and affordable alternative for inter-city travel.

I’ve been worried about climate change for years. We are seeing unprecedented storms, longer droughts and fire seasons and more extreme temperatures, with worse to come if we don’t change our fossil fuel habit. My friends in Sierra Leone tell me their weather is growing hotter and the rainy seasons are longer and more intense. At the same time, I look around me and see bigger and bigger vehicles and more carbon waste for the sake of recreation. I felt that I had to do my part, if only to show that living without owning a car was not only possible, it improved my quality of life and saved me money.

I keep track of all my expenses. In 2018, a year when I had significant truck repair costs, I spent an average of $673 a month on truck-related expenses. I set my monthly vehicle budget for 2019 at $500.

Shortly after I sold my truck, I joined friends Rosemary Kelsall and Bruce Granstrom for eight days on their 790-kilometre walk on the Camino Frances in Spain. It was a great way to start off this experiment. Walking between 24 and 30 kilometres most days taught me that I could cover a good distance on my own two feet – and enjoy the experience.

Living in downtown Revelstoke, I can walk and bike most places. I only need a vehicle for long-distance travel, carrying heavy or bulky items, getting to hiking and cross-country skiing trails and visiting friends in Arrow Heights or Columbia Park at night. I have friends who don’t hesitate to bike or walk between the suburbs and downtown Revelstoke at night, but at 9 or 10 p.m., after a lovely evening of socializing with friends who live several kilometres away, I prefer a ride.

After analyzing my needs, I looked at my options. I treated myself to a new bike and a bike trailer for carrying heavy groceries. This came in handy when going to the farmer’s market or when picking up bulk flour or sugar from local stores.

I joined the Kootenay Carshare. For a refundable deposit of $500 and a minimum monthly fee of $6.72 (including tax) if I don’t use it, I can use their pickup truck if I need to take things to the dump or move big loads. Last September, when I made two trips by truck, covering 40 kilometres over a total of 3 ½ hours, I paid $44.17. All charges include insurance and gas. I probably make four to six trips a year requiring full truck loads. Using the carshare truck is much cheaper than owning a truck for occasional needs.

Taking the Kootenay Carshare out of town requires different calculations. Last May I booked their economy car for a four-day sightseeing trip covering 928 kilometres. Carshare costs decrease after eight hours and the trip cost me $427.42. This works for me if I make few out-of-town trips but adds up if I make many long trips.

In May I entered a car sharing agreement with friends. I paid half of all insurance and repair costs and filled up the gas according to my use. I could take the car out of town for a few days at a time but didn’t feel comfortable taking it for longer periods because it was my friends’ car, not mine. I also agreed not to use the car to go to work. We used the Teamup app to book the car in advance.

This worked really well. I love walking or biking to work, even in the winter. I never once regretted a walk or wished I had a car. One day, during a particularly heavy snowfall, I even cross-country skied to work. Still, it was nice to know that I had access to a car when I needed it. If our timetables clashed, I could book a Kootenay Carshare vehicle in a fleet that now includes two electric cars.

Revelstoke has local transportation options that I didn’t try, and didn’t even think of until recently. With my savings, I could have afforded an occasional taxi ride and stayed under budget. There are also two bus services in town. The BC Transit bus would not have worked for me because I need transportation at night, when it doesn’t run. However, the Resort Express Shuttle, run by Everything Revelstoke, crosses the entire city and runs up to midnight from November 30 to April 19 at a cost of $4 a ride. This service covers the main months when I cannot bike.

Last night I took the Resort Shuttle from a friend’s place after dinner. The shuttle arrived right on time and I was introduced to the colourful world of Geno, the friendly driver, and his “party bus.” Lights of all colours swirled around the bus from a projector in the front. It was a fun ride and in less than 10 minutes, I was home. A crowd of young people were waiting at my final stop to get on. I would definitely take that bus again.

With good options available for local transportation, why did I buy a car?

The main difficulty for me is intercity transportation. Like many people in Revelstoke, I sometimes travel to the Okanagan to shop or catch a flight. I also need to travel south, in the West Kootenays and Slocan, for business purposes. And I plan to do a fair amount of travelling this summer, especially to northern B.C. and Haida Gwaii.

The medical bus, which runs every Wednesday (Tuesdays to Kamloops), is a cost-effective option for travel to the Okanagan and it does accept people travelling for non-medical reasons as long as there is space available. However, it is not really meant for casual use and only stops in Kelowna for a few hours before returning to Revelstoke.

Everything Revelstoke runs a shuttle to the Kelowna airport, but the cost for adults each way is $150 in the summer and $114 in the winter. For me, that’s not an affordable option.

Since Greyhound ended its service in the western provinces, B.C. has been served by a mix of bus companies. Rider Express has a good daytime schedule for its daily trips between Vancouver and Calgary and prices for those destinations are fairly reasonable. I recently travelled to Vancouver by Rider Express for a cost of $110 each way. The ride was comfortable and the drivers were skillful and courteous.

On paper, the connections between Rider Express and the Ebus are good, with an hour-and-ten-minute layover in Salmon Arm. However, buses are often late, especially in winter – our bus to Vancouver was four hours late. With tickets increasingly needing to be pre-booked, I can’t count on making a connection to the Okanagan.

The situation is even more challenging for travellers wanting to head north from Kamloops. Buses from Kamloops to Prince George run only twice a week and the connection with the Rider Express bus only works on Thursdays with a half-hour window between buses. Any delay would mean missing the connection.

I also have many friends and connections in the Columbia River Basin and Slocan areas. On recent trips south, I noticed that the BC Transit bus system runs as far north as Slocan City and connects with Nelson, Castlegar and Trail. Wouldn’t it be wonderful if the people of the entire upper Columbia Valley were connected with an affordable and convenient public transit system?

I often think with longing about the excellent transit system in Europe, where people can live well without a vehicle. Frequent trains and buses get people where they need to go quickly and efficiently. My friends point out the obvious: we are a much bigger country with fewer people and greater distances between cities. Yet I say that our highways are busier than they have ever been.

If we invested a fraction of what we invest in road repairs and upgrades on a serious and affordable inter-city transportation system, if we had good options so that visitors didn’t have to drive the hazardous winter highways, we would save lives and get people out of their vehicles.

My effort to go carless made no real impact on the climate change picture but it did show me where our efforts need to lie if we want to get people out of their cars. I realized that I don’t need a car to live well in this town, though some people, especially those with mobility challenges, may need one. I do need access to an efficient intercity transportation system, though. After my year of serious travelling around B.C. is over, I might sell my car and return to car sharing. I might also share my new car with others in town who need a vehicle part time. This experiment is far from over.