Words and photos by Cara Smith

Not ones to have their spirits dampened by a bit of wet, the Lake Revelstoke Dragon Boat Society was out in full force on a drizzly early summer evening. Bright red PFDs and a sense of determination united them all as they chatted along the boat launch at Martha Creek Provincial Park, convincing two curious campers nearby to join in on the fun.

Once the newcomers were buckled into their life jackets and equipped with wooden paddles, they blended into the group easily. A strong sense of teamwork not only contributes to the social benefits of the group but also is crucial to the functioning of the paddlers as a unit. Unity and cooperation are the keys to making this 41-foot boat glide across the water with relative ease and speed. 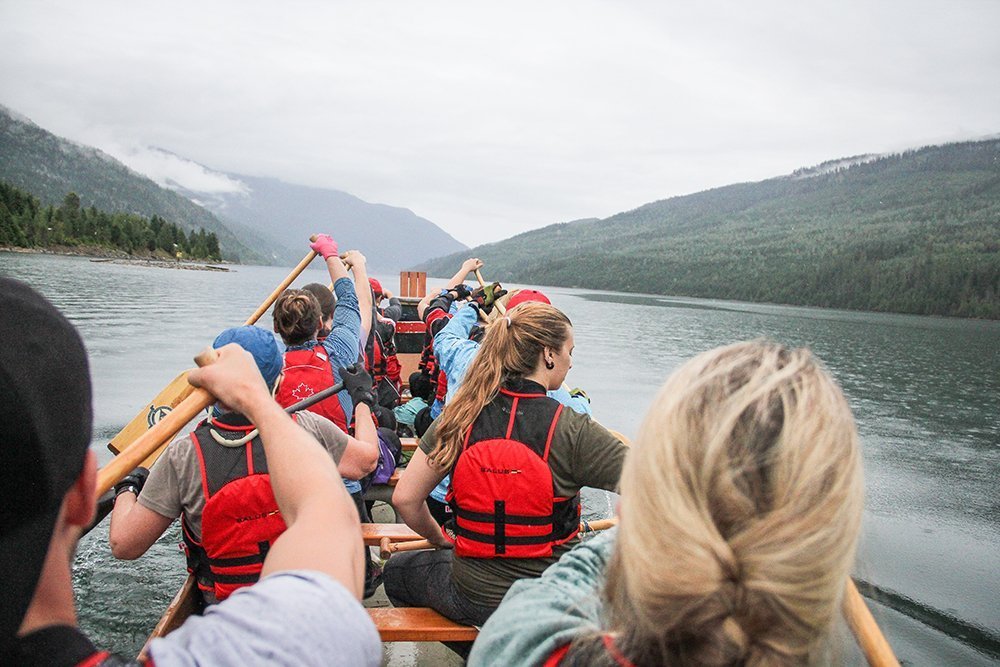 This inclusive attitude may stem from the fact that the sport has been used as a physical and mental treatment for women with breast cancer and breast cancer survivors.

Dragon boating first gained popularity among women with breast cancer or in remission in the 90’s when Canadian sports medicine physician Dr. Don McKenzie challenged the previously-held notion that these women shouldn’t perform upper body exercises due to the risk of swelling in the arms, called lymphedema.

Since there was no evidence to support it, McKenzie was determined to dispel the myth and chose paddling as the very visible way to do so. He gathered a group of women, including Dr. Susan Harris, who joined in on both the paddling and the research, and disproved the belief that this sort of activity could cause harm to breast cancer survivors.

The sport grew in popularity from there, inspiring the formation of dragon boat societies around the world, including one in Revelstoke in 2006.

Two years ago, Barb Tetrault was encouraged by the society’s co-founders Elmer Shoji and Ginger Shoji, who is a breast cancer survivor herself, to try out dragon boating. Tetrault says she quickly realized the sport was for anyone who had an interest.

“A lot of people have the misconception that you have to have had breast cancer or be a survivor of some sort to be involved in dragon boating and Ginger said that’s not true at all,” Tetrault says. 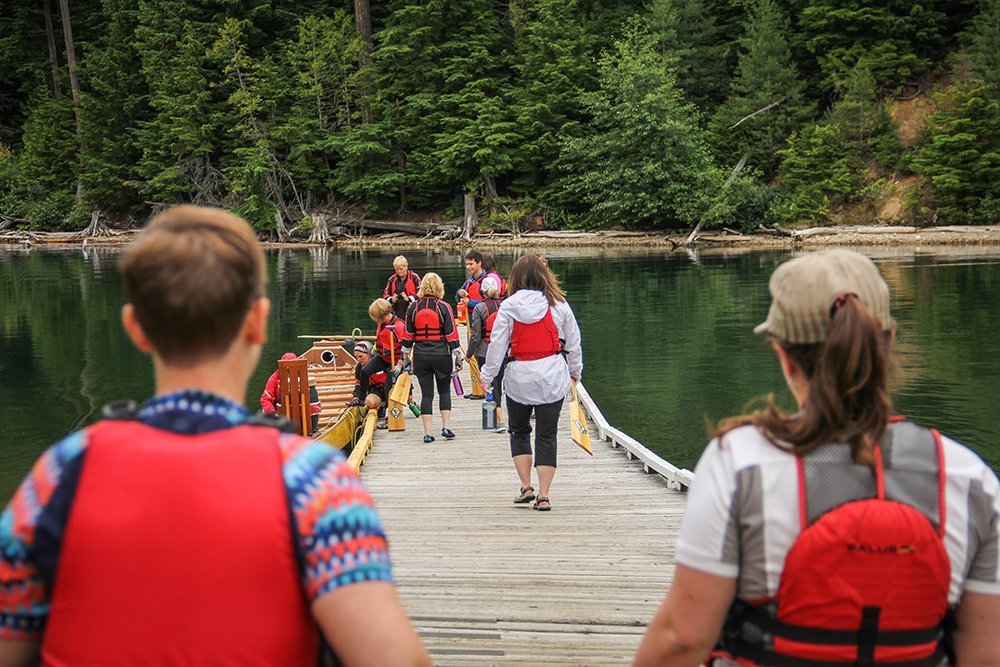 “Anybody who wants to be involved can come out. There’s some pretty strong women out there and a pretty cool group of ladies so we thought it would be a good thing to try. The first night we came, we were hooked. You’re out on the water, it’s peaceful, it’s probably one of the most serene sports really if you love the water.”

While the social aspect and inclusivity are key aspects of the sport, it is still very technical and requires a tremendous amount of skill and fitness to perform well. The team trains twice a week for a number of competitions throughout the season.

“You learn to use your entire body,” Shoji says. “If you use your body correctly then your whole body is exercised rather than stressed. The most important muscles in dragon boating are your core and your legs. You have to use the strongest muscles in your body to get as much power as you can.”

Tetrault and her co-worker and teammate Tracey McKinney are currently learning how to do the lead role in the boat, which involves setting the timing for the rest of the team to follow. Timing is crucial in dragon boating to maximize the speed at which the boat is able to move across the water.

“The first two people need to be communicating constantly so that when we’re picking up our pace, we’re working together to make sure our pace is the same and then everyone behind follows exactly what we’re doing,” Tetrault says.

With as much focus as there is on the technical aspects of the sport and on constant technique improvement, the team has a seemingly endless amount of patience and encouragement for newcomers of all different fitness and skill levels.

And as intense as the competition can get during race time, the team is devoted to never losing sight of the fact that in the end, they’re there to enjoy it and ensure that the entire team is having a positive experience. Tetrault says it’s a matter of having respect for your teammates and remembering that everyone is working towards the same goal.

“Everyone respects everyone’s fitness level so even though there are new paddlers coming out all the time, we understand that they’re not necessarily going to be able to keep their paddles in the water the whole time,” Tetrault says.

Ginger Shoji points out that there are more competitive teams who aren’t inclusive at all, while the Revelstoke team really puts the focus on fun and exercise.

But when the subject of the next competition comes up, the 2019 Penticton Dragon Boat Festival, Shoji hints that a competitive nature might also be part of the fun.