A flood inundation study commissioned by the City of Revelstoke to determine impacts of large floods around the Illecillewaet River shows the Illecillewaet north and south dikes are in good condition and would not overtop in flood events, including with the effects of climate-change factored in.

WSP Canada Inc modelled different flood scenarios with and without the impacts of climate change to determine the adequacy of the dikes built along the Illecillewaet. The management and consultancy service company’s study models extreme flood events to figure out the expected flow.

The flood study factors in the effect of the Arrow Lakes Reservoir water levels and the primary contributor to the Illecillewaet’s high water levels, snow melt. WSP’s report found that the reservoirs levels influence the river’s flood levels up to 860 metres upstream of the Fourth Street Bridge. With this information, the study models realistic scenarios that determine flow levels expected in a 200-year flood, with and without climate change impacts. A 200-year flood has a probability of 0.5% occurrence on any given year and is the regulating size flood in B.C., used to determine the size of all dikes and span of flood maps in the province.

Although the Illecillewaet’s flow is determined primarily by snow melt, the highest flow recorded was in July 1983 due to a massive rain event. The river swelled that year, impacting the railway and other infrastructure, closing the Trans-Canada Highway for weeks. See photos from the flood here. The historical event was the basis for the city’s current flood maps which are contingent on levels recorded during 1983. The findings from this study will help to update those maps. 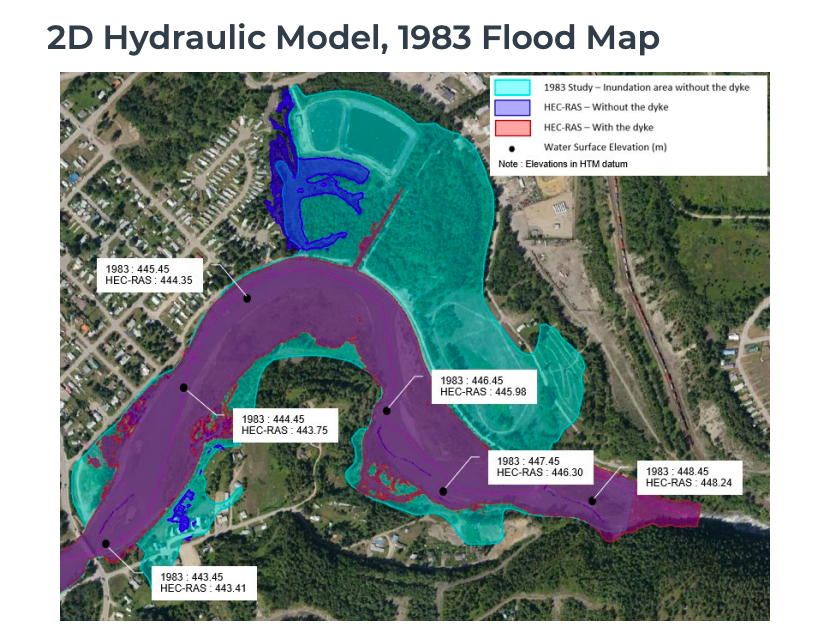 Two parties maintain the existing dikes built above and below the Fourth Street Bridge near the confluence of the Illecillewaet and Columbia River. The dikes below the Fourth Street Bridge are maintained by BC Hydro, while the ones above are the responsibility of the city. Flood-impacted areas around the river include public lands along the gymkhana access road and undeveloped lands within the southside Revelstoke area. However, the study revealed a breach of a dike could cause flooding in industrial and residential areas on the north side of the river, which would include locations such as the Downie Timber mill facilty and the Southside residential neighbourhood.

The Illecillewaet’s Box Canyon is prone to log jams — big ones.

According to the flood inundation study, problems arise if the log jam releases due to a surge of water — as it has done in the past — and large piles of debris careen down the river, raising water levels significantly. If debris is released during a significant flood event, it could reduce the freeboard and jeopardize some dike sections.

A City of Revelstoke council report prepared by Director of Infrastructure and Planning, Steve Black, presented at the June 28, 2022 council meeting regarding the Flood Inundation Study, says, “[Revelstoke Fire Rescue Services] is currently working with Provincial agencies to address the log jam, to reduce the chances of the log jam impacting the [Fourth Street Bridge] in a 200-year flood event.”

During the council meeting, Mayor Gary Sulz said the city is in discussions with Emergency Management BC on how to properly deal with the log jam and who will pay for maintaining it.

In addition, the Illecillewaet deposits a lot of sediment at the confluence due to the steep gradient of the river and creates numerous gravel bars below Box Canyon. Dredging this sediment is essential to reduce flood risks and would be detrimental to infrastructure if left unchecked and a debris and flooding event were to occur. BC Hydro is responsible for dredging the channel to prevent flooding. The study states the extent of past dredging operations is unclear and that between 1987 and 2013, dredging was done six times.

The study’s finds regular maintenance of the dike structures and sediment maintenance is essential. The WSP evaluation of the existing flood structures shows that Revelstoke’s dikes are in good condition aside from unchecked vegetation growth. However, WSP says erosion is a concern, and without upkeep, a dike could be breached and cause residential property damage.

In his report, engineer director Black said the department is creating a new team focused on the issue. “Staff will create a new sub-department titled Dike Maintenance, be included under Ditching and Drainage to better track operations and maintenance activities in the Public Works budget and $20,000 will be reallocated from the current Drainage Ditch Maintenance sub-department.”

Basecamp Resorts Ltd breaks ground on their new do

A three-person task force appointed to look into R

Parks Canada says a wildfire was detected in Glaci