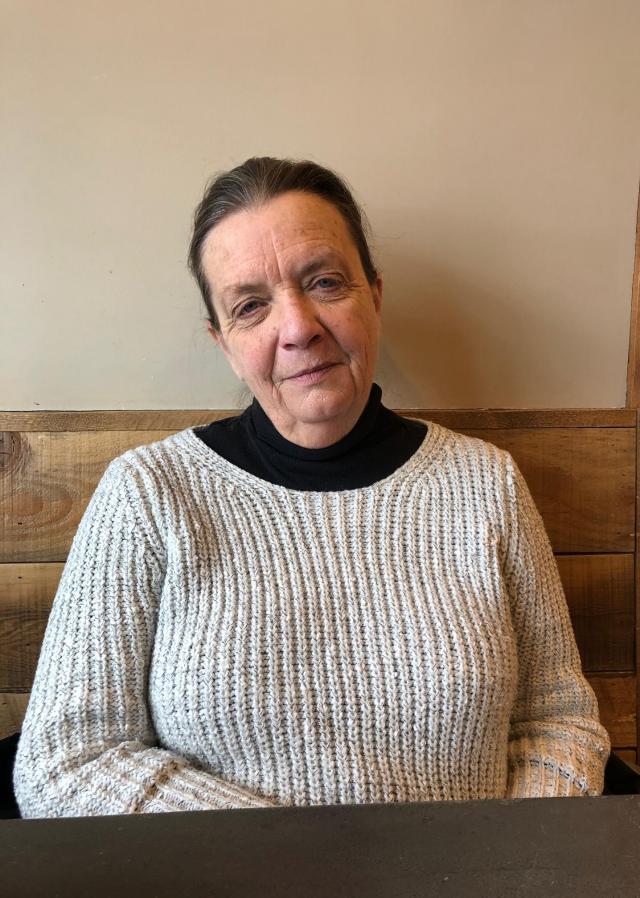 Reflections on 30 years of service to the poor

Cathy Girling is one of Revelstoke’s unsung heroes, having dedicated over 30 years of her professional life to helping those living the deepest poverty in this community. “I’m not sure what drew me to the work originally,” she says, “but I’ve always worked with people, and always with people in poverty.” Girling worked as a Social Justice Advocate and managed the Homeless Outreach Program through Community Connections until January 2020, when she retired from a life of service. Vibrant Revelstoke – Affordability for All asked to sit with her, to learn more about her observations, reflections, and learnings from over 30 years of helping people experiencing poverty.

“It takes a daily toll on your heart, because when we feel compassion for people we can’t help but carry that around.” It’s the connections to people, she says, that has fed her through all these years. Some 25 years later though, she notes that many of the issues that she had identified back then are still alive and kicking. 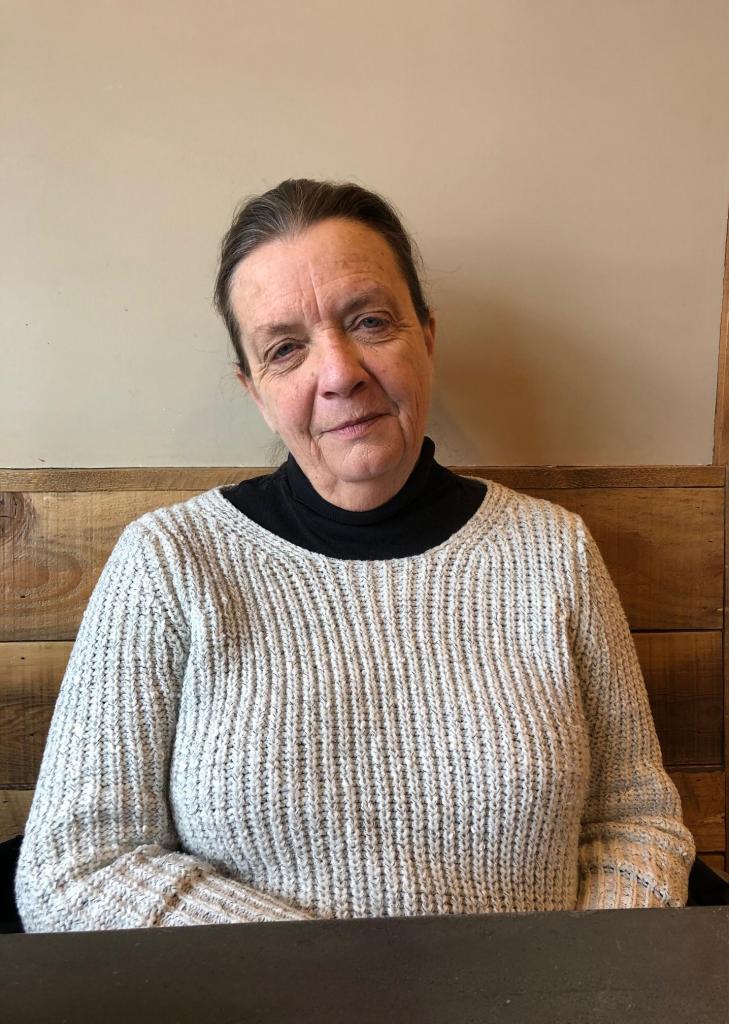 In fact, things have gotten worse. Poverty is a complex issue with multiple layers, but one of the biggest barriers in helping people is “the system” itself, and for anyone working in this field, it’s only a matter of time before one comes up against the system’s walls.

Barriers to change remain the same

When dealing with government institutions, one of the most difficult areas in this community is housing, and helping people access it. “It is incredibly frustrating, painful and demotivating, because there isn’t housing, period,” she says. Girling acknowledges that while some work in housing is currently being done, what’s missing are immediate, day to day solutions for those who need an appropriate place to stay, and that this is not a new problem. For Girling, she saw the writing on the wall many years ago. “I’ve been talking about affordable housing in this community for probably 25 years and there haven’t been huge steps forward. It wasn’t quite as pressing back then, but it got harder as the years went on. I’ve thought to myself a number of times, the future that I was talking about years ago, where there will be nowhere for people to live, has arrived. And the problem is widespread throughout BC.”

As usual, for people struggling to make ends meet, money – or rather the lack of it – is the next biggest barrier. According to Girling, money for daily expenses and unexpected bills like dental and vision care or prescriptions have a huge impact on people, who end up having to make choices between paying rent, say, or having prescriptions filled. For those who can manage to get a loan, they typically just carry it around forever, like a dead weight.  It’s no wonder then, that all of this affects mental health. “All of people’s energy is focused on surviving, and people can’t take part in their community when they have the overwhelming stress of ‘can I provide food for tomorrow? Do I have a place to sleep?’ These are all part of the stress load that people living in poverty experience. And it is a huge stress load.”

For instance, small things we take for granted, like purchasing a pair of gloves or winter boots – items that are necessary to a certain level of comfort or quality of life in Revelstoke, can put someone living in poverty over the edge because they become faced with the choice between food or warmth, for example.  A main part of this problem is that Income Assistance and Disability pensions do not provide more money for people who live in cold, snowy places like we do.  “There are no additional funds just because someone lives in an expensive community, mainly because there is no extra money.”

Would advocating for more money – like a liveable basic income – help?  Girling is doubtful. “I don’t think the system is going to make those kinds of distinctions between people,” she says. “There are legislation policies and procedures that deliver what benefits are available. And this of course changes according to the government in place, but I don’t think the government would ever go beyond what is already in place.” Yet, we know that people who are receiving Income and Disability Assistance in Revelstoke are living in deep poverty.

“My opinion about poverty is that it is only fixed with money. That’s what poverty is, in my opinion. A lack of money for day to day living,” she says.  So what happens when getting more money is not an option? Supports and programs that are already in place, while also very much needed, are helping people to survive poverty, whereas we should be looking at eradicating poverty.

Such a task might seem impossible, and there certainly is no simple, one-size-fits-all solution, but some European countries, such as Finland, have managed to eradicate homelessness. And Canada does have a similar-type of program, Housing First, which started in 2019.  According to Girling, the difference is that northern countries have worked on housing along with setting a basic income. “When you look at those kinds of initiatives, the results are stunning as far as when people have a secure place to live and a secure income that they can survive on. They start making changes in all other areas of their lives.” This creates an effective upward spiral. In her opinion, it does not help to work at breaking down barriers to isolation while people are still living in poverty, and that this is something that will happen naturally when they have a secure place to live and a secure income.

“The thing for us all to understand is that people living in poverty can have joyful wonderful moments just as we can, but as soon as one small stressor rises, that stressor may be small for someone like me, but for someone who is living in poverty that stressor is ten fold because they don’t have the resources to deal with it, which naturally hugely affects mental health. And so mental health and poverty are very tied together.” She believes that the countries who have eradicated poverty are aware of this as well.

Locally, Vibrant Revelstoke – Affordability for All is a group of community members from a variety of sectors and backgrounds that is coming together to discuss affordability in Revelstoke, and move forward with positive and lasting solutions to lifting people out of poverty. Working together to advise governments and carry out action on the ground, this collective impact process has set forward a 5 year goal to reducing poverty in Revelstoke, with the ultimate goal of working towards poverty eradication. An important part of this process is involving those most affected by poverty into the conversation; however, “there is a fine line between that and handing over responsibility to those who are living in poverty, which can add a layer of stress when they believe that it is on them. They are not responsible for changing the system,” Girling cautions.

For those who are working towards the change, it can be a challenge to fit it in a busy schedule. Many of those who are committed to the cause, including civil servants, business owners and those working in the social sector are already pressed for time and doing this work on the side. For Girling, it’s hard not to take part in such initiatives because they are important, but it’s a question of funding. “The biggest challenge for anyone working in this field is that they are paid to serve people, but they don’t get paid to consult, meet, and engage in community processes. No one funds us for those things, as it takes away from my time with people.”

Eradicating poverty is certainly a huge goal, which may seem lofty at best, but we know that that it can be done. After a 30 year career in working with people in poverty, Girling still feels it’s achievable. “I do think it’s possible, but change takes time. It used to be lonely, lonely work, so it’s nice to see people advocating and mobilizing, and I think it’s something to keep working towards.”

Join the affordability conversation!  Sign up for the newsletter or join an action team, or join the Facebook group.