Amid the Saturday bustle of farmer’s markets, protesters gather at the junction of First Street and Mackenzie Avenue to support women’s reproductive rights. In the wake of the United States Supreme Court’s leaked draft opinion to potentially overturn Roe v. Wade, many Canadians have felt the jolting reality regarding the fragility of women’s rights.

Revelstoke residents took to the streets on May 14 to support a woman’s right to choose. 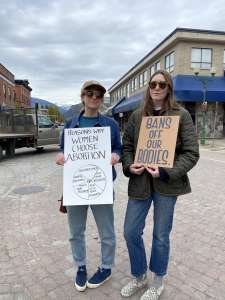 “It has always affected everybody,” says Emily Smith, coordinator of the downtown event, in a live interview with a Mountaineer reporter Emma Hughes:

“Right now in Canada, abortion is decriminalized, but not technically legal. We need it to be legalized in order to protect health across governments. The current Liberal government supports women’s health, however, we have right-wing parties who don’t and we just want to ensure we will not end up like the states. We also stand in solidarity with the women of the US, because this is a human rights issue and what affects one of us, affects us all,” she explains further in an email.

Rally for abortion rights in Revelstoke
1 of 3

Smith says that even though the current events regarding reproductive health are happening in the United States, the issue is still relevant here in Canada. At the event, Smith collected signatures to support a letter she’s drafting for the ministry of health. She says she wants them to get serious about the Canadian Health Act and protect women’s health.

“It’s very relevant. The United States has a lot of influence in the world and especially in Canada,” says Smith.

Smith and others at the protest believe that abortion rights should be protected in the U.S. to ensure and progress rights in Canada and globally.