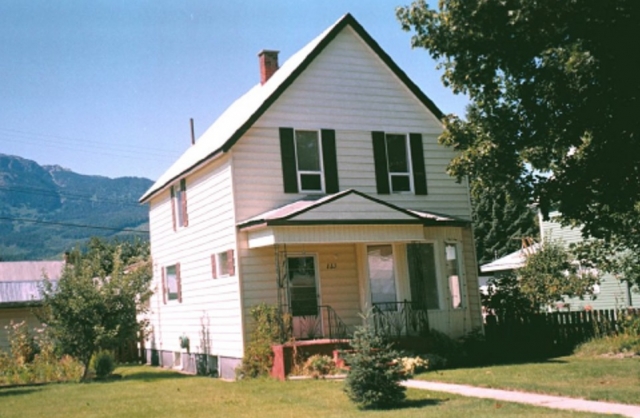 The application submitted by owner Gabe Taylor, requested a heritage alteration permit to demolish an existing non-conforming detached garage on the property in order to construct a two-storey detached structure. The property is located in the Revelstoke Station Residential Heritage Conservation area, but is not listed as a protected heritage property in the Official Community Plan.

A report to city council notes that staff have been working with the applicant since 2016 but have been unable to come up with an agreeable solution.

A public hearing was scheduled for Tuesday’s council meeting but Taylor was unable to attend. Giles Shearing attended  and presented on behalf of Taylor. No other members of the public were in attendance for the public hearing.

“I support Gabe in his efforts,” said Shearing, who is a friend of Taylor. “Gabe understands that in order to move forward this development needs to be permitted.”

Shearing said Taylor only saw the staff recommendation to deny the application on Friday, August 18, and at that time understood more clearly staff concerns. Taylor and his family purchased the house in 2009 and at that time it was not in a heritage conservation area.

Council held a lengthy discussion before voting to deny the application. Concerns were raised by Mayor Mark McKee about providing city staff with clear direction on the matter.

“I would really like to see this project go forward with some kind of solution,” said McKee. “As council I think we need to give some guidelines as to what we’re willing to allow and what we’re not willing to allow. I think to be fair to staff we have to have a real, clear direction on this because we can’t just say this is fine, this isn’t fine. We have to tell them exactly what is acceptable and what is not.”

Councillor Scott Duke agreed, saying he didn’t think the application should be approved in its current form.

“It’s a good idea to work with owners to bring buildings up to today’s standards. I don’t disagree with two storeys, I think we are going to start seeing more density downtown, but it needs to work. It needs to work with staff and requirements. I think it’s a good discussion because it is going to come up again.”

Mike Thomas, director of engineering and development said it is possible for the applicant to change the design of the proposed garage to meet the requirements of the city. Nigel Whitehead, director of planning, said in previous discussions the applicant had been unwilling to make changes to the building footprint.

“There’s a lot of support for something to happen and for this to get fixed up and rebuilt,” he said.

Councillor Aaron Orlando agreed, saying he felt a middle ground could be found that works for the city and the applicant.

“The proponent could work with staff to find out what is and isn’t acceptable. These are our rules. This is the heritage conservation area. We do grant variances, but we usually see that coming at the end where the two parties are working together,” he said.