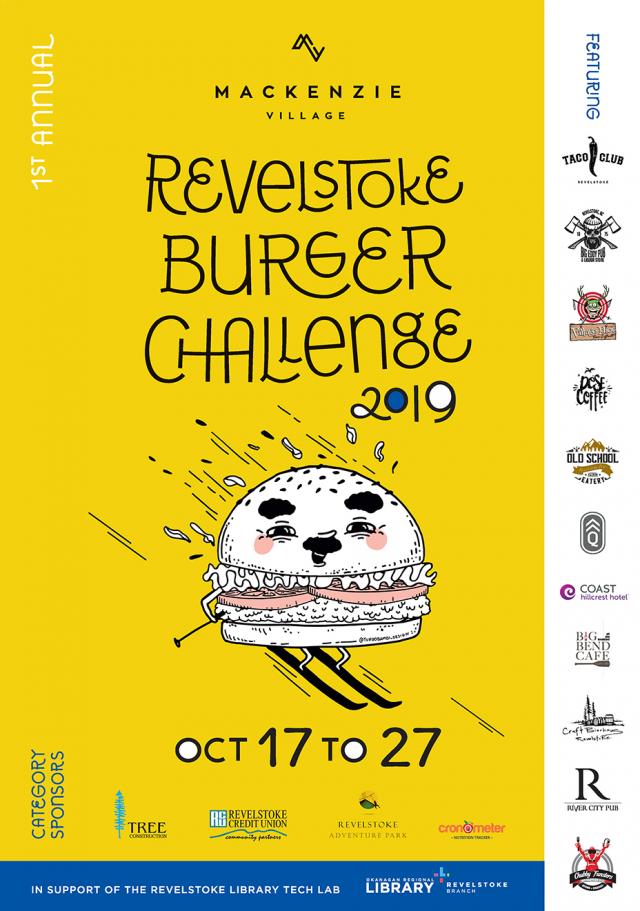 This article first appeared in print in the October/November issue of Revelstoke Mountaineer Magazine.

Revelstoke is about to find out whose burgers are best in town.

Looking to vote in the Revelstoke Burger Challenge 2019? See our voting page here.

Burger Week organizer Mike Brown said the idea to put on the event came about after his wife showed him a story the Mountaineer had run about the Okanagan Regional Library Revelstoke Branch’s Learning Lab expansion project.

“I thought, we need this badly,” said Brown, who is also an owner of the Taco Club. “We have a social investment committee here at the restaurant. It’s employee driven and we give out two $2,000 investments to different social organizations. One of our goals is to invest in things that promote affordability and accessibility in town, and this just seemed right up that alley, a public space that’s really well used.”

A decision was made to invest $2,000 towards the library’s expansion project. After making that donation, Brown sat down with librarian Lucy Bergeron to find out how fundraising was going over all.

“At that point they hadn’t raised much at all and I thought, ‘this needs a push’,” said Brown

“I thought, that would totally fly here. We’ve got lots of good restaurants. Burgers are super approachable and fairly affordable. So the idea had kind of been there before that this is something Revelstoke can do, and then it just seemed like a great idea to do this to raise money for the library.”

A dollar from each burger sold will go towards the library’s expansion project. Brown is hoping to see 5,000 or more burgers sold during the 10-day challenge. Monies from the purchase of sponsorship spots on posters and score-cards will also go towards the library’s project. Brown said while the competition rules are fairly lax, there are still a few. All burgers are priced at $15, which allows for restaurants to play with some premium ingredients without the costs getting too out of hand. The burgers have to be available during all hours a restaurant is open, and cannot be part of another promotion. The burgers also have to be available for the duration of the competition. Aside from that, Brown says he’s hoping to see a lot of diversity from participating restaurants.

“I’m hoping places kind of look to their own style, what their core business is and interpret it in that way. The more different they are the more fun it’s going to be,” said Brown.

Brown said he thinks the burger challenge has the potential to become an annual event, although doing so would involve putting together a committee to decide where the proceeds go each year. Aside from that, it’s also an opportunity to create camaraderie around restaurants.

“I’d say typically there’s not a lot of communication in the industry and this is a really nice way for us to kind of all pull together on something,” said Brown. “It should hopefully stir up some business and interest in the industry at a time when it’s traditionally really quiet.”

For those eating the burgers during the challenge, score cards will be available to help keep track of your favourite burgers. You can cast your votes at the revelstokemountaineer.com for a chance to win a prize.