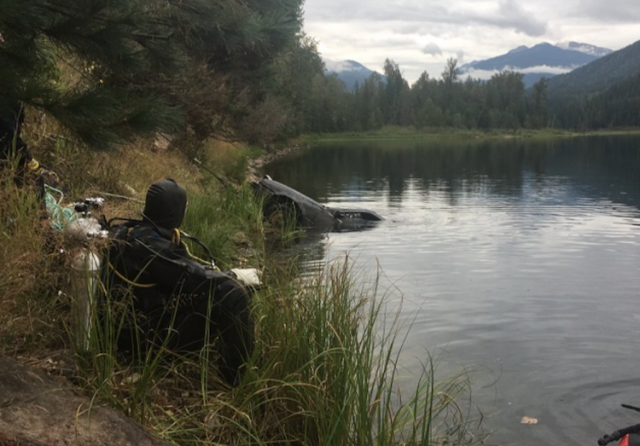 The RCMP have confirmed the body of a woman was recovered from a vehicle found submerged in Griffin Lake last Friday.

Griffin Lake is located next to the Trans-Canada Highway about 29 kilometres west of Revelstoke.

Provincial RCMP spokesperson Staff-Sgt. Janelle Shoihet said police were called to Griffin Lake on Aug. 21 after someone reported a submerged vehicle which was located about 10 feet from shore.

Police were taken to the site and observed “a vehicle that appeared to have been submerged for some time.”

On Saturday, August 24, a tow company with RCMP Investigators and the RCMP Underwater Recovery Team returned to the lake and recovered an older model Honda Accord, with the body of an adult woman inside.

“At this time, investigators are working closely with the BC Coroners Service to confirm the woman’s identity, said Staff-Sgt. Shoihet, “Early indicators are that her death does not involve criminality.”

Shoihet said no further information is available from either RCMP or the BC Coroners Service.

Revelstoke RCMP and the BC Coroners Service are investigating.

The BC Coroners Service has confirmed that a body was found in a vehicle that was recovered from Griffin Lake on Saturday, Aug. 24.

Crews were working at a location near the shore of the lake on Saturday.

The recovery also caused brief delays on the Trans-Canada on Saturday.

Hi Glen, a vehicle is being recovered so expect some delays in that area for the time being. Drive safe and have a great weekend!

Griffin Lake is located about 29 kilometres west of Revelstoke on the Trans-Canada Highway. It is west of Three Valley Lake.

It is unclear how long the vehicle may have been in the lake.

The lake is located next to the highway and it is possible for a vehicle to lose control and crash into the lake. In 2011, a vehicle left the road and plunged into the lake. Fortunately two passing motorists witnessed the incident and jumped into the lake, saving passengers inside. They later received a Governor General’s award for bravery.

Revelstoke RCMP were not available for comment on Monday. A BC RCMP spokesperson is currently following up on questions. A BC Coroners Service spokesperson said police are preparing a statement on the incident. Check back here for updates as they become available.