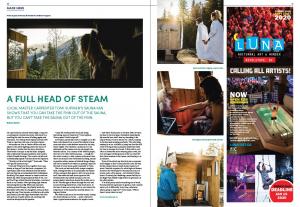 On a particularly cold and windy night, I step into a contemporary downtown home, welcomed by a crackling fire and the scent of baking apples and cinnamon. I’m visiting Tomi Supinen and his wife Tiina to experience his one-of-a-kind creation — the sauna van. But as I shake off the cold and adjust to the subtle lighting and serene mood of their home, I realize that the story starts here. Their home is unique to say the least, designed with a distinctly European aesthetic and touches of their Finnish heritage. The creative details and craftsmanship speaks volumes about the Supinens.

“Would you like a Bud Light?” Tomi asks. “Then we’ll get the sauna set up.”
Tomi and Tiina have been together since 1991, almost as long as Tomi has been a carpenter. It’s a profession that Tomi inherited from his father and one that has accommodated their enthusiasm for skiing. They spent winters in Austria until one fateful day when Greg Stump’s ski film P-Tex, Lies and Duct Tape, which features Revelstoke, convinced them to try Canada. After spending eight winters instructing skiers at Big White and summers working around Europe, they finally settled in Revelstoke with their two daughters, Sara and Sani. Along the way, Tomi became certified as a ski guide and landed a job with Eagle Pass Heliski. But even with such an enviable winter job, working with wood has always been his passion.

“I just like working with wood and doing interesting types of carpentry,” Tomi explains.

“Every sauna I build is special.”

In Finland, saunas date back to roughly 7,000 BC when rocks heated over a wood fire helped to keep caves and other crude shelters warm over the long winter nights. The tradition continued over the millennia and the sauna wove its way deeply into Finnish culture. In a country of five million people, there are over three million saunas — enough for the entire country to take a sauna at the same time. There are saunas in the Parliament building, saunas in gondola cabins, saunas at Helsinki Burger Kings, and even a sauna Ferris wheel, so putting a sauna in the back of a van seems quite reasonable to Tomi.

The van is an intricately built camper complete with cooking facilities to accommodate the family of four, and upon first glance I don‘t see any sauna at all. But when the back doors open and the elements slide and unfold into place, the two-person shelter takes form almost like a slide out in an RV. The flue pipe is fitted through the roof and is soon blowing smoke from a tiny wood stove. In the time it takes us to strip down to our towels, the temperature in the sauna has reached almost 100 degrees Celsius.

We climb in and sit on the wooden bench, closing the doors behind us. It’s hot — quite a bit hotter than a typical sauna session at our aquatic centre — and when Tomi pours on the first ladle of water, the heat in the tiny space intensifies immediately. My nostrils burn and I slow my breathing. Like typical Finns, we sit in silence for a while, soaking in the heat and sweating profusely. The only thing missing is an ice-cold lake to jump into but the chill of the evening wind is a pleasant substitute when it’s time to emerge for a break. It feels odd to cool off on a downtown street wearing just a towel, but even stranger is feeling warm in the icy wind. We have three sessions in the sauna, each lasting 20 to 30 minutes.

Tomi will modestly say that he’s just a carpenter and is happy to take on any jobs that come his way but his resume hints at much deeper mastery of wood. Detailed carpentry for ultra high end homes, furniture for The Explorer’s Society hotel and, of course, quite a few saunas —he’s ticked all those boxes. Currently, he’s finishing a sauna facility for the Eagle Pass Heliski lodge before he gets back on the other planks.

“I’ve done pretty much everything out of wood, from hand hewn log houses to guitars. And I usually want to do it differently every time, otherwise what‘s going to improve?” Tomi muses. “Where there’s wood, there’s a way.”

TnT Saunahouse created a unique Finnish-style sauna in the Tammen Mökki home, which was featured in the December 2019 issue of Revelstoke Mountaineer Magazine.

Just adjacent to the Fletcher home is an outbuilding that contains an exquisite sauna built by local carpenter Supinen. After a design was selected from a dozen or so digital renderings and sample finishes, Tomi built the Fletcher’s sauna over the summer of 2019. 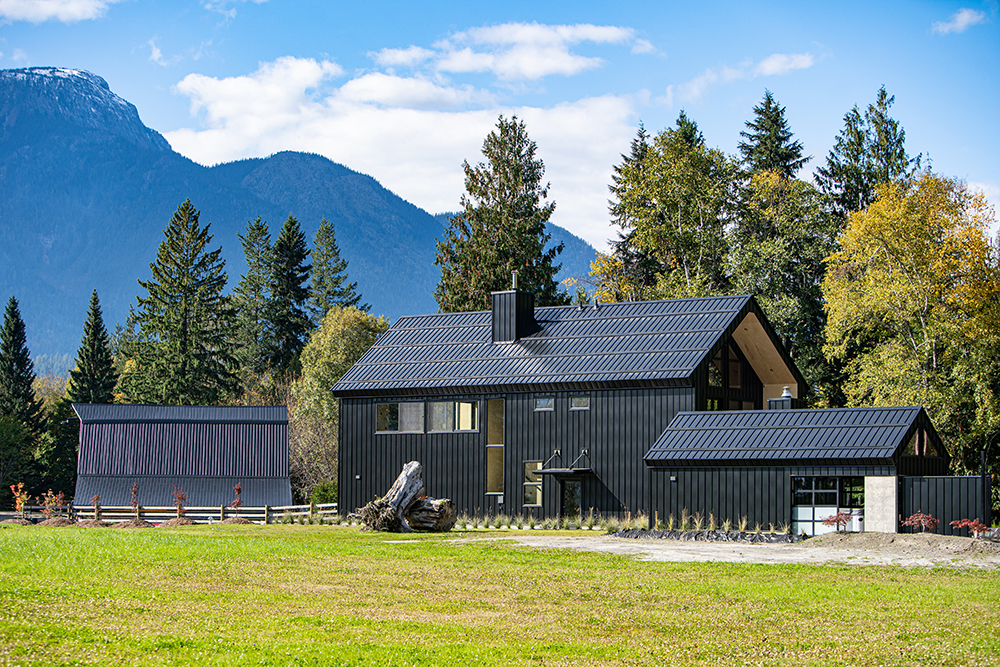 It’s a relatively large space that fits 12 to 16 people and features a large window, sliding glass doors, and an attached change room. A powerful wood fired heater provides an abundance of deep heat, while a smaller supplemental electric heater brings the space up to temperature almost immediately.

The walls are cedar that was first charred, then brushed with a wire wheel, then painted black. The result is an unusually rich black, accented with blonde hints and a delicate grain detail that’s raised from the surface. The benches are hemlock, a wood known for being temperamental but chosen here for its ability to accept a stain that best suits the color scheme of the home. In addition to all this, the woodwork is able to withstand high temperatures and humidity while maintaining fine tolerances.

“I like the way the lights turned out,” adds Tomi, referring to the tiny LED’s mounted on the back of the hemlock benches, shining upward along the walls. “It brings out the grain on that black wood, but also when you throw the water, it lights up the steam. I think that’s my favourite feature.”