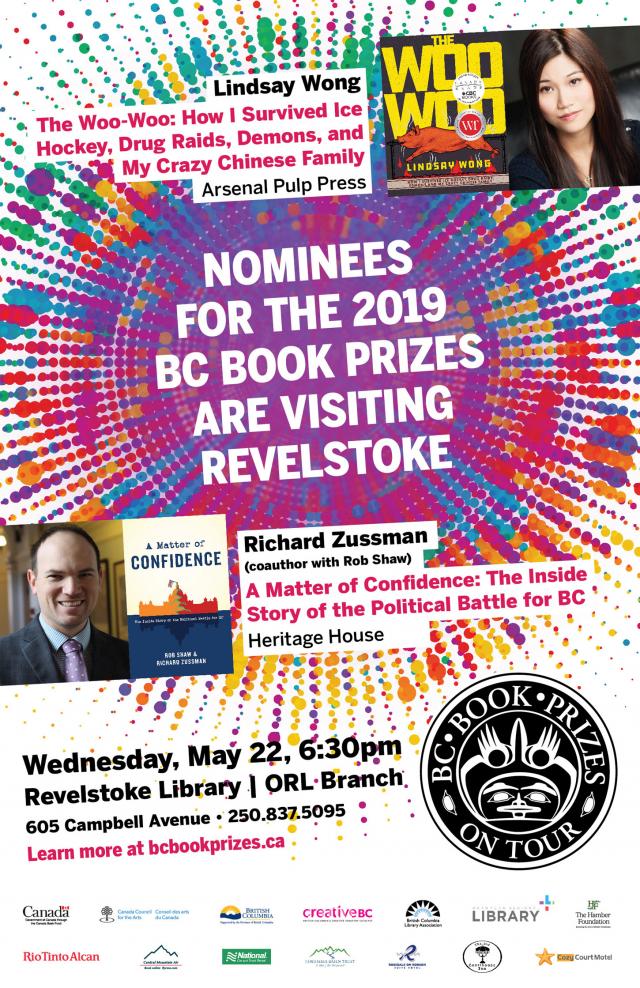 The Revelstoke library is very excited to be hosting an author visit from Lindsay Wong, author of The Woo Woo: How I Survived Ice Hockey, Drug Raids, Demons, and My Crazy Chinese Family, and Richard Zussman, author of A Matter of Confidence: The Inside Story of the Political Battle for B.C.

A publisher’s description of the Zussman’s book describes it as “a breathtaking behind-the-scenes look at the dramatic rise and fall of Christy Clark’s BC Liberals, the return to power of the NDP, and what it means for British Columbia’s volatile political climate going forward.

“British Columbia’s political arena has always been the site of dramatic rises and falls, infighting, scandal, and come-from-behind victories. However, no one was prepared for the historic events of spring 2017, when the Liberal government of Christy Clark, one of the most polarizing premiers in recent history, was toppled. A Matter of Confidence gives readers an insider’s look at the overconfidence that fueled the rise and fall of Clark’s premiership and the historic non-confidence vote that defeated her government and ended her political career. Beginning with this pivotal moment, the book goes back and chronicles the downfall of Clark s predecessor, Gordon Campbell, which led to her unlikely victory in 2013, and traces the events leading up to her defeat at the hands of her NDP and Green opponents. Told by reporters Rob Shaw and Richard Zussman, who covered every moment of the election cycle, and illustrated by candid and extensive interviews with political insiders from both sides of the aisle including Christy Clark and John Horgan this book is a must read for anyone who cares about BC politics and the future of the province.”

Another publisher’s description of The Woo Woo: How I Survived Ice Hockey, Drug Raids, Demons, and My Crazy Chinese Family:

In this jaw-dropping, darkly comedic memoir, a young woman comes of age in a dysfunctional Asian family whose members blamed their woes on ghosts and demons when in fact they should have been on anti-psychotic meds.

Lindsay Wong grew up with a paranoid schizophrenic grandmother and a mother who was deeply afraid of the “woo-woo”—Chinese ghosts who come to visit in times of personal turmoil. From a young age, she witnessed the woo-woo’s sinister effects; at the age of six, she found herself living in the food court of her suburban mall, which her mother saw as a safe haven because they could hide there from dead people, and on a camping trip, her mother tried to light Lindsay’s foot on fire to rid her of the woo-woo.

The eccentricities take a dark turn, however, when her aunt, suffering from a psychotic breakdown, holds the city of Vancouver hostage for eight hours when she threatens to jump off a bridge. And when Lindsay herself starts to experience symptoms of the woo-woo herself, she wonders whether she will suffer the same fate as her family.

On one hand a witty and touching memoir about the Asian immigrant experience, and on the other a harrowing and honest depiction of the vagaries of mental illness, The Woo-Woo is a gut-wrenching and beguiling manual for surviving family, and oneself.

On Wednesday, May 22, they will be at the library from 5:30-7:30 p.m. to read from their books and answer questions. No registration is required for this free event.